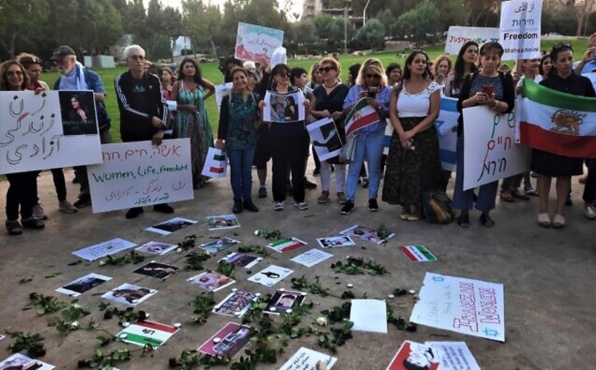 Israelis rally in Jerusalem in solidarity with Iranian women protesters

Some 100 Israelis gathered in Jerusalem’s Independence Park on Thursday afternoon to rally in solidarity with the Iranian women who have been leading anti-government protests for weeks.

“There was something about hearing that a young woman was taken off the street because she wasn’t dressed the way someone wanted her to be dressed,” said Shoshana Keats Jaskoll, a feminist activist and one of the event organizers. “It really affected me… and so many women — and men, by the way — said we want to stand with the Iranian people. We want to stand with the minorities of Iran, the women of Iran, and we want to say this is not okay.”

“And we want to say here in Israel that we believe you deserve your freedom,” added Keats Jaskoll.

Anti-government protests have been roiling Iran in recent weeks, touched off following the death in police custody of Mahsa Amini, a young Kurdish woman who was detained for wearing her hijab too loosely. Activists estimate that more than 90 people have been killed in the protests so far, as police have responded with force and cracked down on rallies as well as social media activity.

Holding signs in Hebrew, English and Farsi, the protesters in downtown Jerusalem — including many Israelis of Persian descent — chanted “Women. Life. Freedom.”