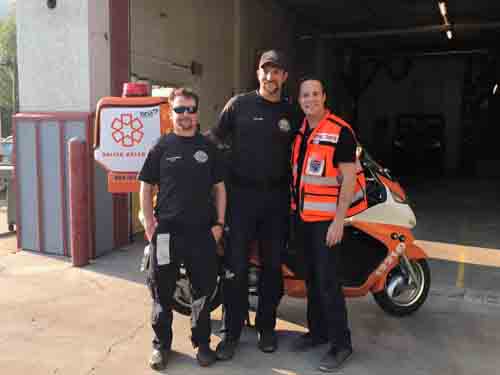 JERUSALEM (Press Release) –– Gavy Friedson, a former Jerusalemite and a United Hatzalah volunteer EMT, saved a young boy in Jackson Hole, Wyoming while he was on tour explaining how the organization works to local EMS teams. During the lecture to the Jackson Hole ambulance department and EMS teams, the local teams received a call that a 10-year-old boy had suffered spontaneous seizures while on a flight over the area. The plane made an emergency landing at the Jackson Hole airport, and the local team, having to interrupt Friedson’s lecture,  invited him to join in the rescue.

“The call came in just as I was explaining to the local EMS teams about our national network of volunteers who drop whatever they are doing to save lives, said Friedson. “We were notified that the plane was making an emergency landing due to the child having seizures and that they needed immediate medical intervention.”

Friedson joined the local paramedics, rushed to the airport and treated the child before he was transported to the hospital for further care and observation. “The local team invited me to join them on the call, and I am very appreciative that they did. It is always special to be given the opportunity to help someone.”

The tour has been dubbed the “Road Show for Life” and has seen Friedson, as well as the organization’s Western US Regional Representative, Dusty Heist-Levine, traveling some 1,800 miles and covering 8 states with an ambucycle. The pair is meeting with local EMS teams and supporters in order to share the life-saving model of United Hatzalah that has decreased the average EMS response time in Israel to under 3 minutes.