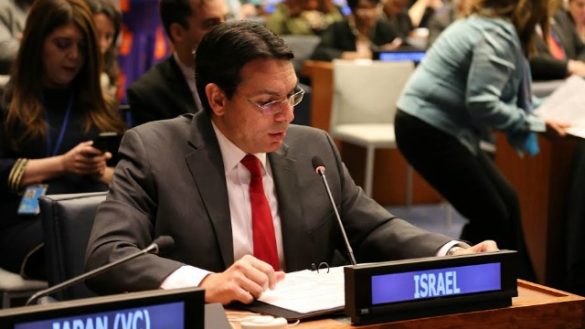 Israel will not permit United Nations agencies to “become branches of the Hamas terrorist organization,” the Jewish state’s envoy to the global body vowed on Wednesday, following the news that a UN employee in the Gaza Strip had been detained and questioned by the Shin Bet over suspected involvement in “security offenses.”

“While UN workers should be focused on humanitarian assistance for the local residents, Hamas is attempting to cynically exploit these officials and turn them into accomplices to terror,” Danny Danon said. “Over the past year, we uncovered a number of incidents in which UN workers took advantage of their positions to assist terror organizations in the Gaza Strip.”

“The UN must act to put an immediate end to this unacceptable situation,” Danon concluded.

Danon’s remarks were prompted by the publication of the details of the case of Nuseirat resident Hamdan Tamaraz — a UNDSS (United Nations Department of Safety and Security) worker.

“During questioning, information was received indicating his involvement in prohibited activity,” the Israeli Foreign Ministry said of Tamaraz. “Following his questioning, he was released, and the findings of the investigation are currently being examined by the relevant authorities.”