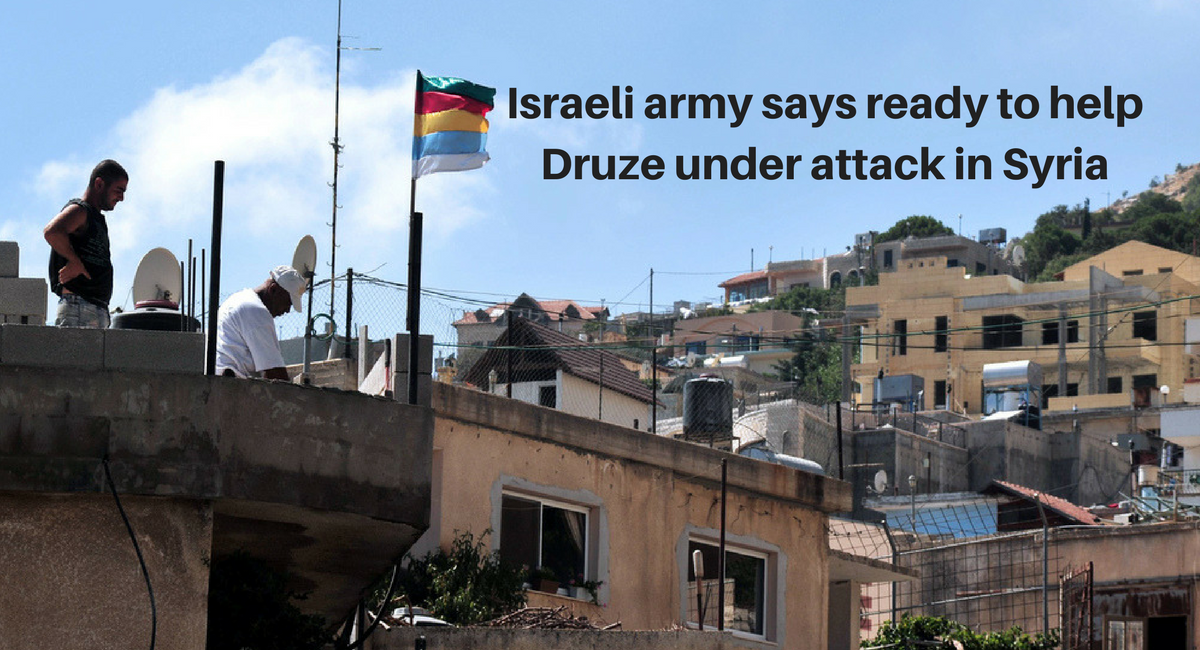 Israel issued a rare warning Friday that it would intervene militarily if necessary to defend a Druze village on the Syrian side of the Golan Heights after it came under attack.

The Druze village of Hadar is aligned with the Syrian government, creating an unusual scenario if Israel does indeed deploy forces to defend it as Syria and Israel are bitter enemies.

Military spokesman Ronen Manelis said in a Facebook post that the army is “prepared and ready to assist residents of the village and prevent damage or occupation of the village out of a commitment to the Druze population.”

The warning came after a suicide bombing targeted the outskirts of Hadar in the southern Syrian province of Quneitra.

An Israeli Druze lawmaker in Israel’s parliament, Akram Hasson, said four of his relatives died in the attack Friday by the Fatah al-Sham Front (formerly Nusra Front), an al-Qaida-linked group fighting in Syria’s civil war. He told Channel 10 TV that his clan comprises about 40 percent of the village.

He said it is “a dark day” for the Druze community both in Israel and Syria. He said 15 people were killed and 45 wounded, including civilians, in the attack on Hadar Friday.

Syrian state news agency SANA had earlier reported that least six people were killed and 21 wounded in the attack, while the Britain-based Syrian Observatory for Human Rights put the death toll at seven and said 23 people were wounded.

An Israeli man from a Druze area in Israel was lightly wounded by stray fire from across the border amid “intense fighting” in Syria, earlier in the day, the military said.

Later, it said dozens of Druze marched to the frontier with Syria and tried to breach the security fence. The military said forces brought back some who managed to cross over.

The Druze in Israel are part of the country’s Arab minority. They are full citizens of Israel and generally serve in the army. They also have a large community in Syria with many loyal to the Syrian government.

Israel has mostly stayed out of Syria’s civil war that’s raging near its northern border, but is believed to have carried out airstrikes on suspected weapons convoys from Syria to its archenemy Hezbollah, the Iranian-backed Lebanese Shiite militant group which has members fighting alongside Syrian government forces. Israel captured the Golan Heights from Syria in the 1967 Mideast War and the two countries remain enemies.