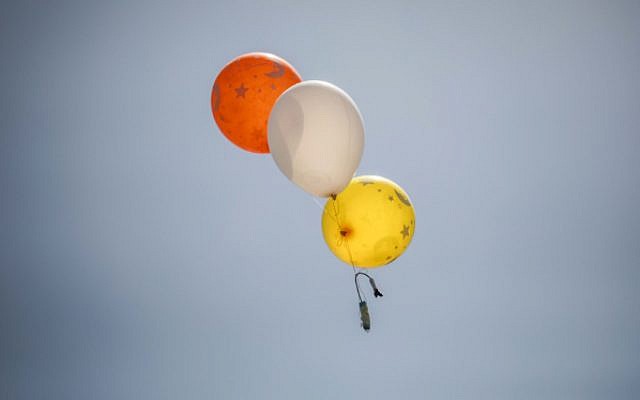 Security forces on Thursday shared details on a new laser system they hope will help quash the scourge of airborne incendiary devices launched from the Gaza Strip — carried by balloons, kites and drones — which have started countless fires and burned large swaths of Israeli land since they began being widely used nearly two years ago.

The system, dubbed Light Blade, is intended to shoot the threats out of the sky before they can enter Israeli territory. It was developed for police and the Israel Defense Forces by three engineers from the private sector who worked with Ben Gurion University researchers and technological departments of the Israel Police and IDF.

Channel 12 news reported Thursday that the laser is capable of engaging targets day or night with an effective range of two kilometers (1.6 miles). It can be moved around on a small trailer or installed on a truck.

Tests of the system were conducted over the past week. A deploy date was not immediately given.

Over the past two years several systems have been championed as potential answers to the problem but no full solution has hitherto emerged.

Border Police chief Kobi Shabtai told Channel 12 that Light Blade “provides a near conclusive response to everything relating to balloons and kites, and delivers a safe and effective solution to the drone threat.”

The tactic of launching balloons carrying explosive and arson devices from Gaza into Israel emerged last year as part of a series of protests and riots along the Strip’s border, which began in late March and is known collectively as the March of Return. The simple and cheap method of attack by Palestinians has proved effective as Israeli security forces have struggled to counter the tactic. Small drones carrying explosives have also been used in attacks from Gaza.

Light Blade is to be deployed along the border with the Gaza Strip as well as along the northern border with Lebanon, the Channel 12 report said.

So far only one working system has been built which, according to the report, cost around a million dollars. But police told the Israel Hayom newspaper they believed numerous systems could quickly be delivered.

Balloon attacks have dwindled recently in light of shaky unofficial ceasefire agreements between Israel and Hamas, the terror group which controls Gaza and seeks to destroy Israel.

In June Israel deployed a system that can spot fire-starting balloons and kites in the sky, track their progress, and then direct firefighters to their landing spots, enabling them to more rapidly extinguish the flames and reduce damage.

Originally developed to counter small drones, Sky Spotter can track the balloons or kites and pinpoint their location, where they are heading, and where they are likely to land. The operators then notify firefighters, who can then rush to the landing points to put out the flames before they spread.

Israeli firefighters have had to battle thousands of fires started by arson attacks in the fields, forests and grasslands around the Gaza Strip since March of last year, though their numbers dwindled significantly in 2019.