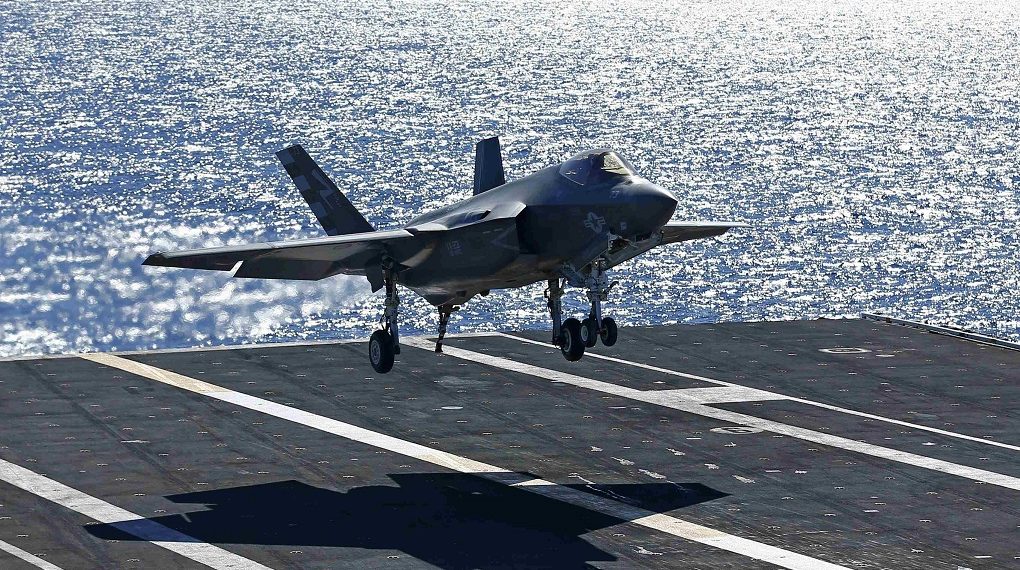 The Israeli Air Force currently has 20 F-35 stealth fighter jets in its possession and is on the way to acquiring 50 aircraft—two squadrons—a senior executive from Lockheed Martin, the defense corporation that manufactures the jet, has said.

On a recent visit to Israel, Gary North, vice president for customer requirements at Lockheed Martin, who in the past served in the U.S. Air Force as the former air-component commander for Central Command in the Middle East, spoke to Israeli journalists in recent days at Lockheed Martin offices in Tel Aviv.

North said Israel has submitted a request for information about the potential purchase of a third squadron of F-35 fifth-generation jets, adding that Lockheed Martin was delivering all of the relevant documentation in response to the request.

“In May 2018, the first declared use [by Israel] of the jet was made,” he noted, referring to a comment by IAF commander Maj. Gen. Amiram Norkin, who said that Israel had become the first country in the world to use the advanced jet during combat operations, likely against Iranian targets in Syria.

The jet heralds the arrival of a new age in air combat, according to North, due to its unprecedented capabilities, its ability to fuse and share real-time sensor data, and its long-range strike ability.

Although “no nation in the world has got more current air-to-air kills than Israel,” North said, “the dog fight in today’s world is really yesterday’s discussion. Because with this airplane and the capabilities of the missiles of the airplane, and the air superiority role, those in the Adir [the IAF’s name for the F-35, meaning ‘Mighty’ in Hebrew], will sweep the sky at a range where adversaries will not even know they’re there.”

Israeli defense industries are playing a key role in the manufacture of the aircraft. Elbit teamed up with U.S. company Rockwell Collins to produce the aircraft’s Helmet Mounted Display, allowing pilots to peer through their cockpits 360 degrees and receive an array of sensor data on the situation in the air and on the ground. Israel Aerospace Industries produces the F-35’s wings and wing skins—a special layer placed over the wings that provide them with stealth capability.

“The Israeli industry is absolutely phenomenal,” said North. “There’s Israeli content on every single F-35 built. We work very closely with your industry. We’re very proud of both the quality and the content that Israeli technology brings not only to the Adir in Israel, but to every F-35 built. There’s been over $1.74 billion, as of six months ago, generated in the Israeli economy. And over the life of the program, at the existing rate, we believe it will be over $5 billion into the Israeli economy,” he stated.

North addressed the F-35’s ability to fly in airspace contested by militaries that have advanced surface-to-air missile (SAM) batteries—a key requirement for Israel. Syria represents the most heavily contested air space in the world, with both the Syrian regime and Russia deploying advanced SAMs there.

“The militaries of the nations that are flying in Iraq, Afghanistan and Syria, particularly in Syria, they understand the capabilities of the [advanced Russian-made SAM] S-400, the double-digit SAMs that are in place there. Clearly, the militaries here, as they take off either in training or combat, they understand that they are in the sector [of the SAM], if those radars are turned on,” he said.

Due to its stealth technology and electronic warfare abilities—described by North as being “nine times more powerful than any other electronic jamming platform”—the F-35 is well-equipped to operate in such dangerous airspace, he said.

“Here and around the world, the F-35 is being proven both in peacetime and combat. It is without a doubt—in the words of many of the chiefs of air forces who fly the airplane—the most lethal, the most survivable and the most adaptable airplane that has all the attributes that the forward-thinking technologists from years ago looked at,” stated North.

“Many of you have been to Fort Worth and seen, in our plant, the words on the wall underneath the F-35, which says ‘peace through strength.’ Lots of strength. And for those of us that were on the ramp at Nevatim [air base in southern Israel on the Dec. 12, 2016] when your prime minister made the proclamation of the arrival of the airplane, he said, ‘Let it be known that around the world that the State of Israel will use the Adir to ensure the freedom of Israel.’ ”

North touted the plane’s very low-observable stealth (VLO), which he described as critical to evade powerful radars and enemy firepower.

“Stealth really does matter. If you’ve ever been shot at, and you’ve ever been sectored going into combat operations and you realize that the adversary can see you and can target you, it’s not a good feeling.”

The ability not to be seen by the adversary but to see it is “absolutely the difference in success and in failure against the most advanced double-digit SAMS—not only in this region, but around the world,” argued North.

Lockheed Martin has delivered more than 475 F-35s worldwide so far, to nine countries. Three countries—the United States, the United Kingdom and Israel—have deployed it in combat operations to date.

“I can tell you as a former aviator, survivability is the No. 1 thing people need to think about in planning operations. Lethality is No. 2. And where you’re going and what you’re carrying is No, 3 and No. 4,” said North.

Platform will be used in multiple ways

The aircraft’s situational awareness means that “the pilots who fly it often say no one will ever sneak up on this airplane. Whether it’s being shot at with either triple A [anti-aircraft guns] or an air-to-air missile, the pilots will see this at great range and take great countermeasure capabilities to ensure the survivability of the airplane and mission success,” he added.

The aircraft is also integrating with ground forces and missile-defense systems, which North pointed out “are not foreign to anyone here in the State of Israel.”

So the platform,” he added, “will be able to be used in multiple ways to ensure awareness, targeting and operational preparation of the battlefield in a way that no other platform can.”

Older, fourth-generation planes like F-16s and F-15s are expected to work closely with fifth-generation jets, relying on them to continue to be survivable as air spaces become more contested with high-tech weaponry.

The older jets will have to stay away from the threat range or be used for very specific missions, said North, “whereas the F-35 can go anywhere operators want to go.”

Reprinted with permission from JNS.org