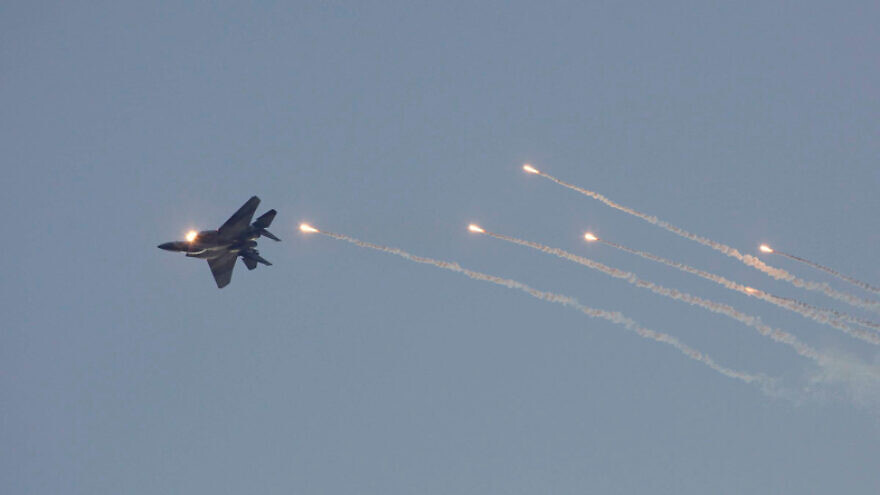 “The attack was carried out in response to the launching of rockets by an Iranian force from Syria’s territory into Israel, intending to strike Israeli territory,” read the IDF statement, referring to a barrage of rockets launched toward Israel’s Golan on Tuesday.

“We showed the Iranians we have the capabilities to react forcefully,” said a senior Israeli defense official on Wednesday morning. “We know they have casualties and probably also fatalities.”

The Syrian Observatory for Human Rights, an opposition activist group with a network of activists across Syria, said the strikes killed 11 people, including seven non-Syrians who are most likely Iranian.

The figures come from Rami Abdurrahman, who heads the Britain-based war monitoring group. The Observatory says the Israeli airstrikes targeted arms depots belonging to Iran’s Quds Force in the Damascus suburbs of Kisweh and Qudsaya.

Abdurrahman added that several other areas were targeted in Wednesday’s strikes, including the Mazzeh airbase in western Damascus where air defense units are stationed.

Syria’s SANA news agency said the two people were killed by shrapnel when an Israeli missile hit a house in the town of Saasaa, southwest of Damascus.

The governor of the Quneitra province in Syria said the two civilians were Hayoub Safad, a tailor, and his wife.
Russian Deputy Foreign Minister Mikhail Bogdanov said on Wednesday that Israeli air strikes on Syria were a wrong move, and Moscow had contacted its allies about the incident, Interfax reported.

After the strikes, Prime Minister Benjamin Netanyahu said: “I made it clear that whoever harms us – we will strike back. This is what we did tonight against military targets of Iran’s Quds Force and Syrian military targets in Syria, after rockets were fired at Israel last night.”

Israel’s new hard-line defense minister, Naftali Bennett, issued an equally firm statement.
“The rules have changed: whoever fires on Israel during the day will not sleep at night,” he said. “Our message to the leaders of Iran is simple: you are no longer immune. Any place you dispatch your tentacles, we will chop them off.”

About 20 targets were hit in the attack, more than half of them being Iranian headquarters and camps. The rest were Syrian surface-to-air missile batteries. Israel did not damage the more advanced S-300 battery, which is deployed near Russian troops. One of the strikes targeted the National Defense Building at the Damascus Airport, which houses the Iranian Quds Force headquarters.
The building was not completely destroyed, and the damage was deliberately limited.

IDF’s Spokesman said Wednesday morning that the army was preparing defensively for all scenarios, including Iran’s response.
SANA reported earlier that Israeli fighter jets have attacked targets in the Damascus area at around 1:20 A.M.. According to the agency, Syrian air defense systems intercepted several missiles before they were able to reach their targets.

The aircrafts were reported to enter Syria from the Golan Heights and southern Lebanon. The Syrian Human Rights Monitoring Center reported that large fires broke out following the attacks at several locations and there is evidence of dead and injured.

On Tuesday, four rockets were fired from Syria into northern Israel and intercepted by the Iron Dome air-defense system. According to sources in Israel’s defense establishment, the rockets were fired following a directive from Iran. The military said that no damage was caused to Israeli communities after rocket sirens awoke residents there early in the morning.

Earlier this week, the IDF carried out a surprise exercise in the Jezreel Valley in northern Israel.

Rockets had been previously fired from Syria toward northern Israel: attacks similar to Tuesday’s took place in May 2018, as well as in January and September this year. In none of the attacks did rockets reach targets in Israeli territory, mostly because of interceptions by the Iron Dome defense system.