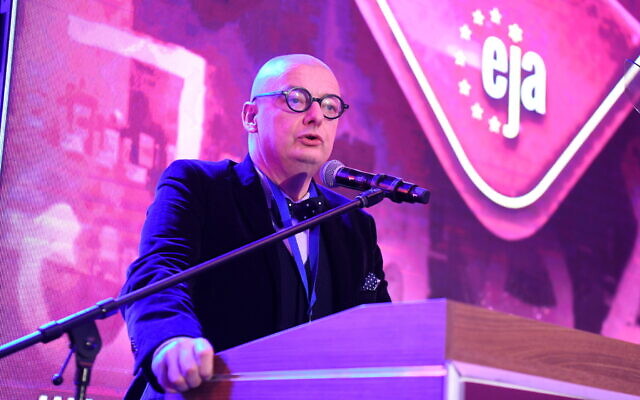 Israel skips Poland antisemitism meet, but some still see thaw in ties ahead

A Polish opposition politician expressed regret at the passage of a law this summer that limited Holocaust restitution efforts, and said he hopes ties between Poland and Israel — put in deep freeze by the legislation — will be repaired soon.

“I personally, from the very beginning, was opposed to both legislations that made so much damage to Polish-Israeli relations,” Michał Kaminski, a Polish senator and a deputy marshal of the Senate with the opposition Union of European Democrats, told The Times of Israel during an interview earlier this week. “Those legislations I opposed in both chambers, they are very unfortunate.”

Kaminski was referring to not just the legislation from July regarding Holocaust restitution, but also a 2018 law that criminalized statements implying the Polish nation played a role in victimizing Jews in the Holocaust. The law was later amended to remove the possibility of criminal charges, but the legislation caused major diplomatic tension between Warsaw and both Israel and the United States.

Three years later, a law that effectively prevents future restitution to the heirs of property seized by the Nazis during the Holocaust led to a downturn in ties between Israel and Poland that has remained in effect since the summer. Each nation recalled its ambassadors, and Foreign Minister Yair Lapid called the law “antisemitic and immoral.”