Israel shuts down for Yom Kippur 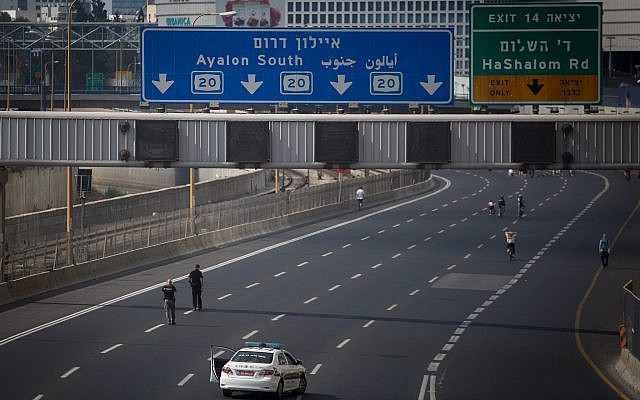 Israel shut down on Tuesday evening for Yom Kippur, the Jewish Day of Atonement and the holiest day of the Jewish calendar.

All flights in and out of Ben Gurion airport ceased at 1:35 p.m.. The airport will reopen Wednesday night with arrivals starting at 9:30 p.m., while departures will resume at 11:30 p.m. Border crossings also shut just after noon and will reopen at 10.00 p.m., Wednesday.

Public transport also halted with buses and trains stopping their routes until after the fast day. Only two trains will run Wednesday night, one from Naharia to Ben Gurion airport and another from Beersheba to Tel Aviv. The rest will resume Thursday morning.

Roads were expected to largely clear of cars by early evening as is the national tradition — to be replaced with multitudes of people on bicycles and other non-motorized vehicles.

Driving during the Jewish Day of Atonement is considered taboo, and many secular Israelis have turned the day into a biking holiday, taking advantage of the car-free roads.

A recent poll found that this year some 60 % of Jewish Israelis plan on fasting on Yom Kippur holiday this year, but only 23% of those surveyed said that they would attend all the day’s lengthy synagogue services.

Security and rescue services, however, remain on high alert.

For the Magen David Adom Rescue service, Yom Kippur is one of the busiest days of the year with hundreds of extra medics, paramedics, ambulances and volunteers deployed across the country.

Most injuries over Yom Kippur come from accidents on the roads as tens of thousands of children and teens take advantage of the deserted streets to ride their bicycles. Other common Yom Kippur injuries are caused by parents leaving children unattended outside synagogues and, of course, dehydration and complications from fasting.

Hospitals were working with limited emergency medical crews only.

Weather was forecast to be warmer than usual and sunny Wednesday with a high of 29°C (84°F) forecast for Jerusalem and Tel Aviv, increasing the chances for dehydration for people fasting.

The Israeli army implemented a closure on the West Bank and Gaza Strip on Monday night — preventing any but humanitarian cases entering Israeli territory — as is routine policy during holidays, which are considered a particularly sensitive time.

In Jerusalem police were on high alert in the area of the Old City to prevent friction as many thousands of Jewish worshipers flock to the Western Wall for prayers.

On Monday night tens of thousands took part in penitential prayers at the Wall.