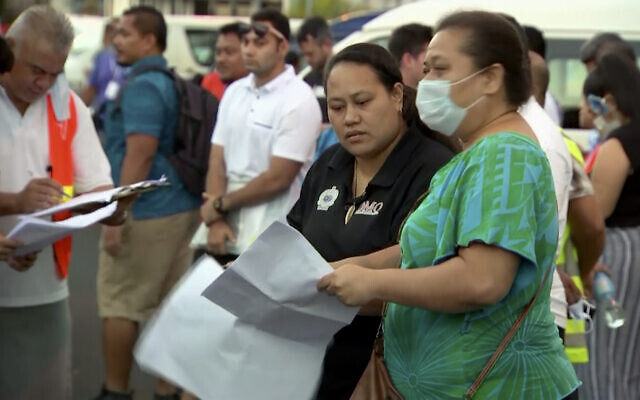 “Israel is sending an emergency medical team in coordination with the WHO to Samoa in response to the Samoan measles outbreak. Israel is committed to supporting our dear friend Samoa in this crisis,” tweeted Ambassador Itzhak Gerberg.

No further details were given on the make up of the team.

At least 63 people, mostly children, have died since the outbreak began in mid-October, with the crisis blamed on so-called “anti-vaxxers” convincing parents that immunization was dangerous.

Samoa was on Friday enduring its second day of a lockdown as government and aid workers spread out across the nation of 200,000 people to vaccinate as many as possible.

Samoan authorities warned Friday that anti-vaccine propaganda would not be tolerated, after a social media campaigner was arrested for opposing the mass immunization drive.

The government has special powers after declaring a state of emergency to deal with the measles crisis and the Samoa Observer reported that the campaigner could face two years in jail.

However, officials in the Pacific can do nothing about foreign-based anti-vaxxers, who the Observer reported were swamping government websites with material that Tupai described as “nonsense.”

Examples include Texas-based conspiracy theorist Ellen Dann, who falsely claims the vaccines, not measles, have caused Samoa’s mounting death toll as part of a scheme by pharmaceutical companies to sell more medicines.

UNICEF’s regional chief on Thursday told AFP that social media giants such as Facebook and Twitter were “incredibly irresponsible” for allowing the misinformation to spread on their platforms.

The health ministry reported on Friday morning 140 new cases over the previous 24 hours.

One more person died, bringing the confirmed death toll to 63, with 55 of the victims aged four or under.

Twenty children were critically ill in hospital, according to the ministry.

Infants are the most vulnerable to measles, which typically causes a rash and fever but can also lead to brain damage and death.

Samoa’s measles immunization rate dropped to about 30 percent after an incident last year involving the death of two babies that anti-vaxxers incorrectly blamed on the medication.

Israel itself is also suffering from a measles outbreak — the WHO says 3,755 Israelis were diagnosed with measles between April 2018 and March 2019. By July, the Israeli Health Ministry pegged the number of local measles cases at 4,292.

The latest outbreak has so far claimed three lives in Israel: In November 2018, an 18-month-old toddler who was not vaccinated succumbed to it, becoming the first recorded measles-related death in Israel in 15 years. In December, the disease claimed an 82-year-old woman, and in August 2019, Israeli flight attendant Rotem Amitai, 43, who had contracted measles on a flight from New York in late March, became the third fatality of the outbreak.