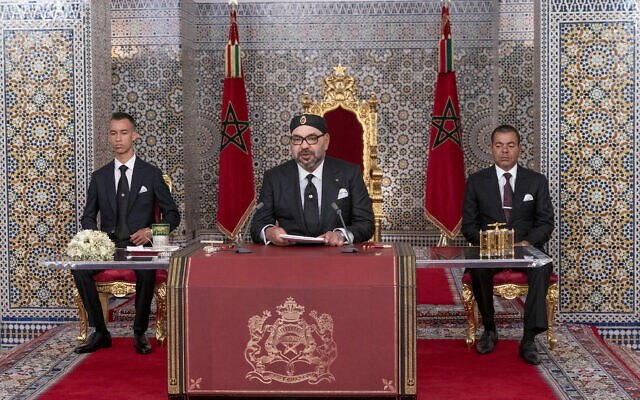 Israeli officials are hopeful that a breakthrough in normalizing relations with Morocco can be achieved in the next few days, Channel 12 news reported Wednesday, with Prime Minister Benjamin Netanyahu aiming to use the news to bolster his political chances.

The report comes after Netanyahu met with US Secretary of State Mike Pompeo in Lisbon, Portugal. After leaving Portugal, Pompeo is slated to travel to Morocco, where he is expected to push normalization with Israel with King Mohammed VI in Rabat.

The Channel 12 report, quoting unnamed senior officials in Jerusalem, said Israel was hoping to present a “real diplomatic accomplishment” in the next few days, before the end of the period to form a new government expires.

If no lawmaker manages to get the support of at least 61 members of the 120-strong Knesset by December 11, elections will be called for the third time in less than a year. If those third elections are called, the first possible date for them to be held would be February 25, 2020, according to a Knesset legal official.

Two rounds of elections in April and September failed to produce an elected government — a first in Israeli political history.

The report said Netanyahu wants a breakthrough before the December 11 deadline as a means of putting pressure on the political system.

And if he can’t manage to get it in the next few days, the report went on, he wants to use the achievement in his campaign for the next elections. Netanyahu has previously received boosts from the Trump administration in the run-up to elections.

Days ahead of the April vote, for instance, Trump recognized Israeli sovereignty over the Golan Heights.

Netanyahu has made diplomatic outreach to Africa, Latin America, and the Far East a cornerstone of his foreign policy, and has pushed for more open ties with moderate Arab states.

Israel and Morocco do not have official diplomatic ties. In 2017, Mohammed VI canceled participation in a West African summit to avoid Netanyahu.

Morocco is one of several Arab states in the Middle East being pushed by the US to sign non-belligerence agreements with Israel, as a step toward normalizing relations with the Jewish state, according to a Tuesday report by Axios.

Last month a State Department official said that Morocco was a “critical partner for us across the range of issues.”

“Morocco plays a great role across the region as an important partner in promoting tolerance (and) has these quiet ties and relationship with Israel as well,” the official told reporters, on customary condition of anonymity.

Morocco has unofficially welcomed Israeli investors and tourists. Some 3,000 Jews live in Morocco, a fraction of the number from before the 1948 creation of Israel, but still the largest community in the Arab world.

The State Department official also called Morocco a “great counterterrorism partner,” including by bringing back nationals who joined the Islamic State group in Syria — the sort of repatriation resisted by European allies of the United States.

According to the Axios website, a senior White House official has reportedly urged several Arab states in the Middle East to sign non-belligerence agreements with Israel as a step toward normalizing relations with the Jewish state.

Citing “Israeli, Arab and US sources,” Axios reported on Tuesday that the US administration’s deputy national security adviser Victoria Coates met last week with ambassadors to Washington from four Arab nations — the United Arab Emirates, Oman, Morocco and Bahrain — and said the US would support the move.

The meetings sought to gauge the willingness to upgrade relations with Israel among the four countries, the report said. All have maintained increasingly robust strategic and intelligence ties with Israel, a link bolstered by a common view of Iran as a shared regional foe.

But the defense ties have remained mostly secretive, and have not translated into formal diplomatic relations.

The ambassadors all told Coates they would consult with their governments and return “soon” with their response, the report said.

Then, on Monday and Tuesday, Coates and other US officials met with a delegation of their Israeli counterparts to discuss the matter.

The report cited Israel’s current political deadlock and the Arab governments’ longstanding desire to see progress on the stalled Israeli-Palestinian peace process as factors that “will make implementation very difficult.”

The initiative was first proposed by Foreign Minister Israel Katz, who revealed in October he had been pushing such non-aggression treaties with several Arab countries in the Gulf, a “historic” démarche he said could end the conflict between Jerusalem and those states.