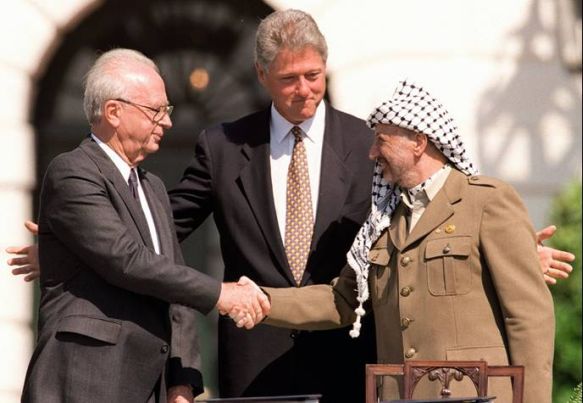 In September 1993, following intense behind-the-scenes contacts between Israeli and Palestinian negotiators in Oslo, an agreement was achieved between Israeli Foreign Minister Shimon Peres and PLO Chairman Yasser Arafat. On September 9, 1993, Arafat sent a letter to Prime Minister Rabin, in which he stated unequivocally that the PLO:

In reply, Israel recognized the PLO as the representative of the Palestinians in the peace negotiations.

On September 13, 1993, a joint Israeli-Palestinian Declaration of Principles (DOP), based on the agreement worked out in Oslo, was signed by the two parties in Washington, outlining the proposed interim self-government arrangements, as envisioned and agreed by both sides. The arrangements contained in the DOP include immediate Palestinian self-rule in Gaza and Jericho, early empowerment for the Palestinians in West Bank, and an agreement on self-government and the election of a Palestinian council. Additionally, extensive economic cooperation between Israel and the Palestinians plays an important role in the DOP.

Shortly after the signing of the Declaration of Principles, negotiations commenced between Israeli and PLO delegations on the implementation of the interim agreement, which was accomplished in three stages:

1. The Gaza-Jericho Agreement was signed in Cairo on May 4, 1994, and applies to the Gaza Strip and to a defined area of about 65 square kilometers including Jericho and its environs. While the Declaration of Principles is a short document, consisting of approximately 20 pages, the Gaza-Jericho Agreement is a document containing almost 300 pages (the agreement itself and four annexes) with six maps attached. The Gaza-Jericho agreement addresses four main issues — security arrangements, civil affairs, legal matters, and economic relations. The document includes agreement to a withdrawal of Israeli military forces from Gaza and Jericho, a transfer of authority from the Israeli Civil Administration to a Palestinian Authority, the structure and composition of the Palestinian Authority, its jurisdiction and legislative powers, a Palestinian police force, and relations between Israel and the Palestinian Authority.

2. On August 29, 1994, the Agreement on Preparatory Transfer of Powers and Responsibilities was signed by Israel and the Palestinians. The Agreement puts into effect the next phase (early empowerment) of the Declaration of Principles.

In accordance with the DOP, the Agreement provides for the transfer of powers to the Palestinian Authority within five specified spheres: