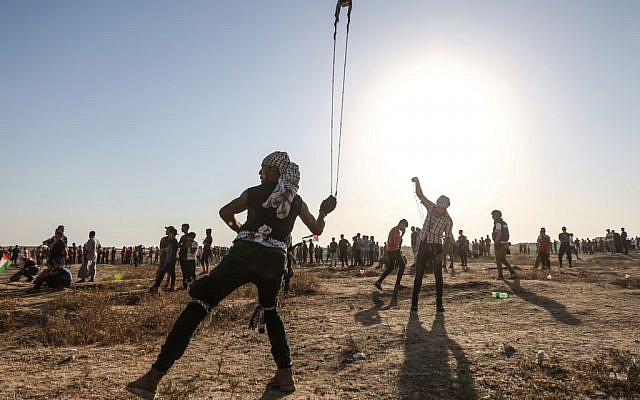 Israel has offered Hamas economic concessions and will ease its blockade of the Gaza Strip in return for a long-term ceasefire, as tensions rise amid a flurry of rocket attacks emanating from the enclave and mutual threats, Lebanon’s al-Akhbar newspaper reported Friday.

According to the report, the proposal was made by Egyptian intelligence officials during a meeting with top Hamas members, Channel 12 news reported.

While making the proposal, the Egyptians reportedly warned officials from the terror group that Israel is serious in its threats to carry out a wide-ranging military campaign if the violence continues.

Hamas for its part, said it was not responsible for the recent firing of rockets from the coastal enclave toward Israel, blaming “rogue elements.”

Both Israel and Egypt enforce a number of restrictions on the movement of people and goods into and out of Gaza. Israel says the blockade is necessary to keep Hamas and other terror groups in the Strip from arming or building military infrastructure.

Palestinian terrorists in the Gaza Strip fired a rocket toward southern Israel on Wednesday night, prompting a retaliatory Israeli raid.

The projectile failed to cross the border and landed inside the enclave, according to the Israel Defense Forces.

In response, an Israeli military aircraft bombed a Hamas observation post along the border of the northern Gaza Strip, the IDF said.

The rocket launch from Gaza triggered sirens in the Israeli community of Netiv Ha’asara, north of the Strip.

The attack interrupted a night-time swimming event that the community was hosting at the time, sending dozens of children rushing to bomb shelters.

The rocket attack came amid a flurry of exchanges of fire and mutual threats between Israel and terror groups in the Gaza Strip. Israel has accused the Iran-backed Palestinian Islamic Jihad of being behind the recent violence emanating from the enclave.

On Tuesday, terrorists in the Strip fired four mortar shells toward Israel. Three landed on the Gaza side of the border and one struck an open field inside southern Israel. In response, an Israeli aircraft bombed a Hamas observation post east of Juhor ad-Dik in the central Gaza Strip, according to the Israel Defense Forces.

Since the start of August, an increase in rocket fire and attempts by Palestinian gunmen to cross from Gaza into Israel have been met with IDF airstrikes on Hamas targets, threatening a fragile ceasefire between Israel and the ruling terror group.