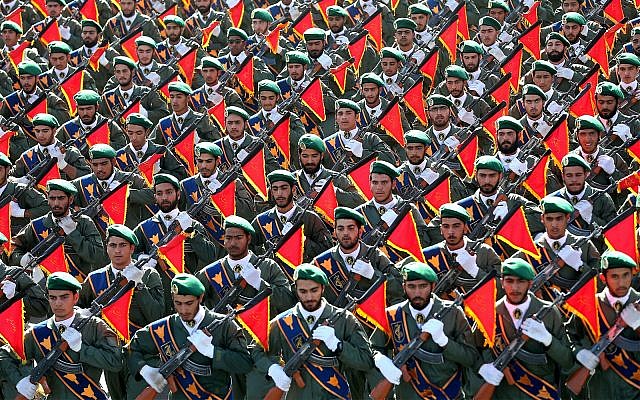 “I welcome the decision by the US and Gulf states to impose additional sanctions on Hezbollah and the Iranian Revolutionary Guards Corps. This is exactly what came up in my conversation with the US Secretary of the Treasury [Steven Mnuchin]. This is the right way to counter Iranian aggression,” Katz wrote on Twitter in Hebrew.

The United States and six Gulf allies announced the sanctions earlier Wednesday in a move to tighten control over the finances of both of the groups.

The sanctions were set by Riyadh-based Terrorist Financing Targeting Center, a two-year-old group that includes Saudi Arabia, Bahrain, Kuwait, Oman, Qatar and the United Arab Emirates in addition to the United States.

They targeted companies supporting the Basij Resistance Force, a paramilitary group subordinate to the Revolutionary Guard, that the Treasury said are used “to oppress domestic opposition with brutal displays of violence” and supply fighters to regional conflicts.

Among the 25 was Iranian Bank Mellat and mining, manufacturing and investment firms that allegedly support the Basij.

Four of those listed were individuals running Hezbollah’s operations in Iraq, the Treasury said.

All 25 have previously been named in US Treasury sanctions announced in 2018.

“The TFTC’s coordinated disruption of the financial networks used by the Iranian regime to fund terrorism is a powerful demonstration of Gulf unity,” said Mnuchin in a statement.

“This action demonstrates the unified position of the Gulf nations and the United States that Iran will not be allowed to escalate its malign activity in the region,” said Mnuchin, who addressed a business forum in Riyadh on Wednesday.