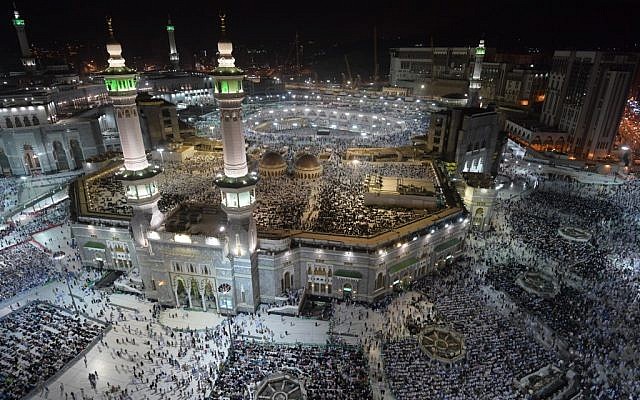 The State of Israel this week congratulated Saudi Arabia on its national day, showering the Gulf kingdom with warm wishes for peace and security, despite the absence of formal diplomatic relations between the two countries.

Arabic-language Twitter accounts run by the Foreign Ministry in Jerusalem on Sunday and Monday issued at least three messages on the occasion of Saudi Arabia’s 89th national day, which, every year on September 23, celebrates King Abdul Aziz Ibn Saud naming the area after his family in 1932.

“We congratulate the Saudi people on the occasion of its 89th national day,” the Foreign Ministry’s Arabic-language channel wrote.

“May this holiday take place again in safety, security and a climate of peace, cooperation and good neighborliness. We ask God, the exalted, that your efforts to develop, prosper and advance will be successful,” it said.

A previous tweet from the same account featured a video of a table covered with green and white cakes decorated with the Saudi flag and congratulatory messages, apparently baked with the hope of “celebrating together in the coming year.”

A Foreign Ministry Twitter channel, created specifically for outreach to the Gulf states, on Monday sent “sincere congratulations” to the Saudi people.

“We ask God to keep you safe and secure and wish you prosperity,” the tweet reads.

Israel’s Foreign Ministry routinely tweets congratulations on countries’ national days, but only to those with which it has formal diplomatic ties.

The existence of clandestine relations between Jerusalem and Riyadh, focused mainly on security issues, especially given the mutual enmity to Iran, are well-known, but public displays of affection on official diplomatic channels are exceedingly rare.

Earlier this month, Saudi Arabia harshly attacked Prime Minister Benjamin Netanyahu’s announcement that he would annex the Jordan Valley and other parts of the West Bank, convening an emergency meeting of the Organization of Islamic Cooperation to condemn the planned move.

Israel has over the last few years intensified its outreach to Arab countries, especially in the Gulf.

In July, Netanyahu hosted a Saudi Arabian national, blogger Mohammed Saud, in his Jerusalem office, a day after the man was attacked by Palestinians angry with his pro-Israeli views. Saud, known as a die-hard supporter of Netanyahu, was invited to Israel by the Foreign Ministry as part of a delegation of bloggers and journalists from various Arab countries.