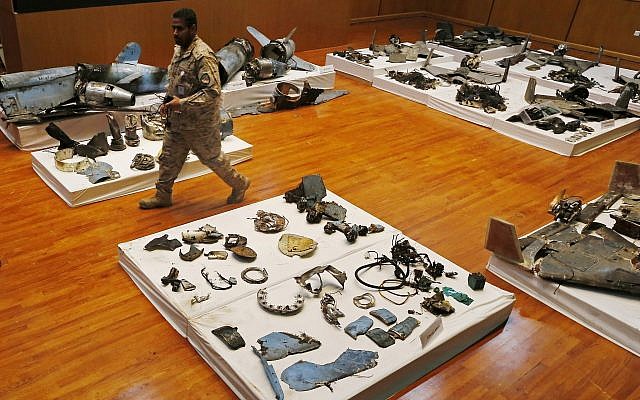 Israel’s defense establishment is analyzing last month’s strike on Saudi Arabian oil facilities, which is being blamed on Iran, to learn how to protect the country from a possible similar assault, Hebrew media reported Monday.

The September 14 combined drone and cruise missile barrage on two facilities knocked out half of the kingdom’s oil production, and impressed Israeli analysts in that it succeeded in penetrating Saudi defenses, which include the Patriot air defense system that Israel also uses, Channel 13 news reported.

Although Yemen’s Iranian-backed Houthi rebels claimed responsibility, the US, Britain, France, Germany, and Saudi Arabia have accused Iran of being behind the attack. Tehran denies the allegation.

A senior officer in the IDF’s Military Intelligence unit, who could only be identified by the first letter of his Hebrew name, ‘Yud,’ told Channel 13 that the Iranians showed an impressive ability in hitting Saudi Arabia.

“They get a high mark, too high,” Yud said of the Iranian attack, but stressed that Tehran would “absolutely” not succeed if it attempted to launch a similar assault on Israel.

Israel, he said, is assessing the threat in “a very informed and very balanced way.”

“The army is prepared for any developing scenarios in the northern arena,” Yud continued, and noted that this included countering a possible barrage of cruise missiles and drones.

Also Monday, IDF chief Aviv Kohavi warned that any attack on the country would be met with an aggressive response.

“We will not allow an attack on Israel and if it happens we will respond forcefully,” Kohavi said at a memorial service for fallen paratroopers. “We are keeping our eyes open, having daily situation assessments, and taking professional decisions that lead to attacks and the thwarting of threats.”

Channel 12 news reported that defense officials who have studied the weapons used in the attack on the Saudi facilities concluded that a similar assault by Iran on Israel, if it came, would likely be launched from western Iraq, where there is a strong presence of Iran-backed militias.

Unlike ballistic missiles, which usually fly through a high arc on the way to the target, cruise missiles and drones fly at low altitude, making them harder to detect.

Israel’s defenses against a missile attack, and in particular a cruise missile attack, begin with a network of radar systems around the country to detect an incoming threat. In addition, Israel has begun deploying the David’s Sling system, which is designed to intercept ballistic and cruise missiles at ranges of 40 to 300 kilometers.

On Sunday, the high-level security cabinet convened for the first time in two months, amid cryptic warnings by Israeli leaders in recent days of a growing security threat from Iran.

The discussions were based on concerns that Tehran, emboldened by a recent string of attacks in the Gulf region that drew no military response from the West or its Middle Eastern allies, could set its sights on attacking Israel, Channel 12 reported.

During the meeting, ministers discussed a proposal, being pushed by Prime Minister Benjamin Netanyahu, for a NIS 1 billion ($290 million) project to boost Israel’s air defenses that would place particular focus on defending the country against cruise missile attacks.

Iran regularly threatens Israel, viewing the country as a powerful enemy allied with the United States and Sunni nations in the region against Tehran and its nuclear ambitions.

Israel has also thwarted operations in neighboring Syria where Iranian fighters and those of its proxy Hezbollah have been fighting alongside forces loyal to President Bashar Assad since 2011.

Israel has vowed to prevent Iran’s regional proxy militias from obtaining advanced weapons to use against the Jewish state and has carried out hundreds of airstrikes in Syria whose goal it says is to prevent the delivery of weapons and to stop Iranian military entrenchment in that country.

In addition, recent months have seen several airstrikes against Iran-backed militias in western Iraq, some of which have been attributed to Israel.