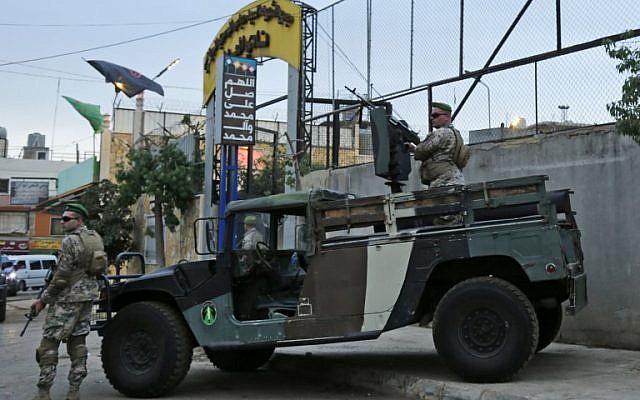 With the political crisis showing no sign of abating in Lebanon, Israeli officials said Wednesday they have asked partners in the international community to condition any aid to the country on efforts to get rid of advanced arms stationed there.

“In discreet talks with various capitals, we made it clear that any aid meant to guarantee the stability of Lebanon needs to be conditioned on Lebanon dealing with Hezbollah’s precision-guided missiles,” a senior official said, speaking on condition of anonymity. “Anything short of that will be problematic, in our eyes.”

The Foreign Ministry ordered Israeli diplomats “in all relevant countries,” including the US and European states, to emphasize the need to cease providing aid to Lebanon as long as the Iran-backed Hezbollah terror organization does not cease upgrading its military capabilities that could target Israel, the official added.

The messages were conveyed to Israel’s partners even before the recent protests erupted in Lebanon, the official said.

Jerusalem is careful not get involved in domestic Lebanese politics, the official stressed, noting that any statements from Israeli officials could have negative effects.

Prime Minister Benjamin Netanyahu this week repeatedly warned that Iran was seeking to place missiles around the region to be able to hit Israel and other areas.

“Iran wants to use Iran, Iraq, Syria, Lebanon and Yemen as bases to attack Israel with statistical missiles and precision-guided missiles,” he said, using a term that refers to imprecise munitions. “That is a great, great danger.”

On Tuesday, Lebanese Prime Minister Saad Hariri stepped down, several days after a wave of protests broke out in the country, which citizens lamenting the high cost of living and accusing the government of widespread corruption.

Hezbollah supporters rampaged through Beirut in the immediate aftermath of Hariri’s resignation.

The Hezbollah rampage marked a violent turning point in Lebanon’s protests, which have called for the resignation of the government and the overthrow of the political class that has dominated the country since the 1975-1990 civil war. The government is dominated by factions allied with Hezbollah, the powerful terror group in the country.

Read more: The Time of Israel