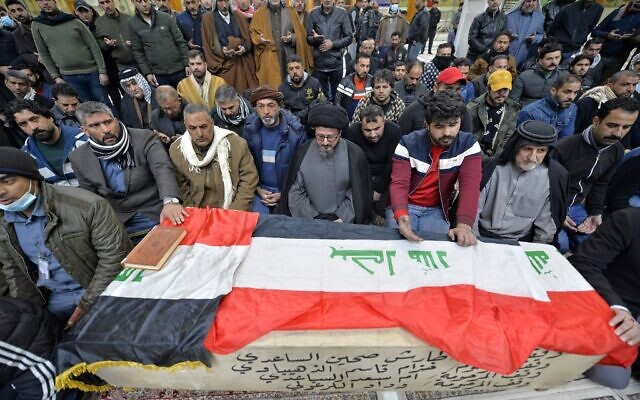 The Islamic State group claimed responsibility for a twin suicide bombing that killed 32 people and wounded 110 at a crowded market in central Baghdad on Thursday.

It was the deadliest attack on the city in three years, when another suicide bomber targeted the same area.

The first attacker drew a crowd at the bustling market in the capital’s Tayaran Square by claiming to feel sick, then detonated his explosives belt, the interior ministry said.

As more people then flocked to the scene to help the victims, a second suicide bomber set off his explosives.

The open-air market, where second-hand clothes are sold at stalls, had been teeming with people after the lifting of nearly a year of COVID-19 restrictions across the country.

An AFP photographer at the scene said security forces had cordoned off the area, where blood-soaked clothes were strewn across the muddy streets and paramedics were rushing to take away the casualties.

The health ministry said those who lost their lives had died on the scene of the attack, and that most of the wounded had been treated and released from hospital.

After midnight, IS posted a claim of responsibility for the attack on its online propaganda channels.