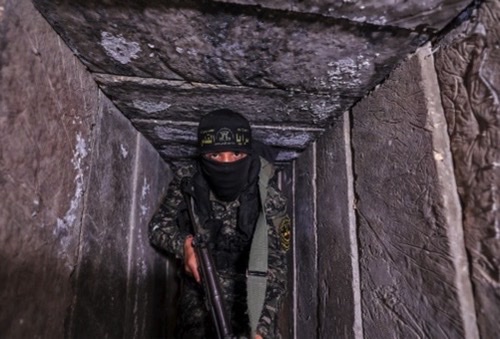 In a “tunnel city” under the sandy soils of southern Gaza, Palestinian terrorists are preparing for the next conflict with Israel, as tensions in Jerusalem threaten to escalate.

The underground passageways leave no trace on the surface.

But in a wooded area near Khan Younis, seven masked men in military fatigues carried a collection of machine guns and grenade launchers into a tunnel entrance discreetly tucked into the foot of a small hill.

The gunmen wear headbands of the Al-Quds Brigade, the armed branch of the Islamic Jihad terror group which is the second-largest armed faction in Gaza, after Hamas, which rules the territory.

The tree branches covering the hole reveal a narrow passageway walled and topped with concrete blocks.

Complete with electric lights, a ventilation system and telecoms cables, the tunnels also have small rooms for storing weapons and ammunition.