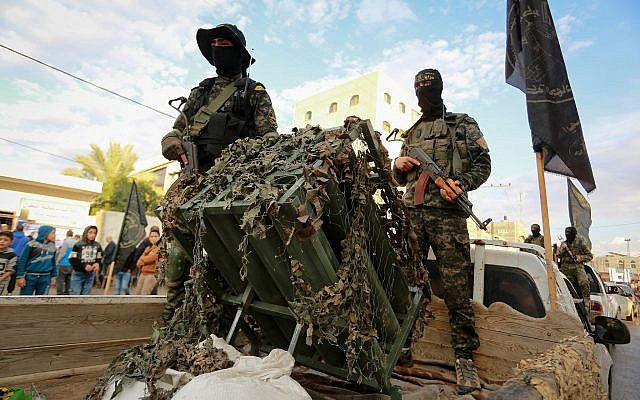 The Islamic Jihad terror group is seeking to set up rocket production capabilities in the heart of the West Bank, threatening to fire the projectiles at cities in central Israel, according to an Israeli television report.

The PA forces also seized a rocket prototype built by the cell, the report said.

The instructions for building the rockets reportedly came from Lebanon. The report said it was not clear if the orders were from Islamic Jihad or the Lebanese terror group Hezbollah, both of which are backed by Iran.

Though the rockets produced by the Islamic Jihad cell were amateurish, the report noted they could be improved over time, threatening the heavily populated Tel Aviv metropolitan area and Israeli coastal plain.

Israel has accused Islamic Jihad of being behind recent violence emanating from the Gaza Strip and last month charged that it was actively trying to ignite a fresh war in the region.

August saw an uptick in rocket fire and attempts by Palestinian gunmen to cross from Gaza into Israel, which were met with IDF airstrikes on Hamas military targets, threatening a fragile ceasefire between Israel and the ruling terror group.

Tehran provides tens of millions of dollars each year to terror groups in the Gaza Strip, mainly to the Islamic Jihad and Hamas, which rules the enclave.

In June, the chief of Israel’s Military Intelligence addressed the prospect of war in Gaza, saying that Hamas is not interested in a large-scale conflict. But he added that the Islamic Jihad had far fewer responsibilities toward Gaza residents and thus less to lose in a war, making it a far likelier instigator of violence.