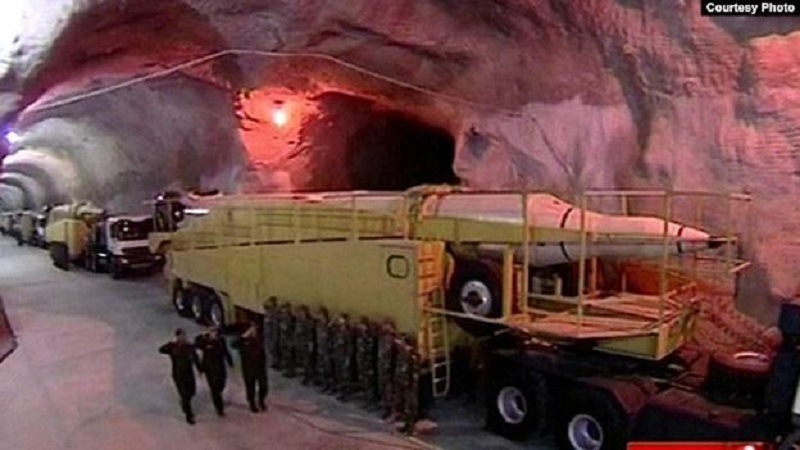 “We have been digging tunnels since 1984 when we first began making missiles.” These were the words of Revolutionary Guards general Amir Ali Hajizadeh, commander of the IRGC’s Aerospace Force. He was interviewed by the Iranian regime’s Documentary TV a few hours after the National Council of Resistance of Iran (NCRI)- US representative office, revealed the existence of numerous tunnel formations across Iran that were used to stock long-range missiles.

Hajizadeh had played a vital role in the September 14, 2019 drone and cruise-missile attack against Saudi Arabia’s ARAMCO facilities deep inside Saudi territory, according to information revealed on September 30 by the NCRI’s US representative office in Washington DC.

Even though Hajizadeh is not a member of the regime’s Supreme National Security Council (SNSC), according to the NCRI’s information, provided by the People’s Mojahedin (PMOI, Mujahedin-e Khalq or MEK), he was present in the SNSC’s session on July 31, 2019, when the decision to prepare an attack on Saudi oilfields was made.

After the decision was approved by the regime’s supreme leader Ali Khamenei, Hajizadeh was instructed to begin the implementation of the plan.

More than ten points of construction/stockpiling of missiles with ranges of up to 2000 km were revealed for the first time by the NCRI’s US representative office. Satellite photos of all the locations were made available to the public.

“We have to protect our arsenal in an adequate way. The idea goes back to 1984, just when we began thinking of missiles. Before the first such material was imported into the country, we had already begun digging the tunnels to hide them,” Hajizadeh affirmed in his interview, broadcast a few hours after the revelations made by the Iranian Resistance.

“Nowadays they call them missile-cities, deep beneath mountains, very sophisticated tunnels are dug deep into the ground to stockpile ammunition, and hide missile launching bases and other instruments and also the personnel under war conditions. Our enemies are worried because such locations are out of their reach,” he further explained.

Turning to the regime’s nuclear project, the commander of the IRGC’s aerospace force boasted: “You remember during the nuclear negotiations, how sensitive our counterparts were on (the underground nuclear facilities of) Fordo, not as much on (the uranium enrichment facility in) Natanz. Why? Because Fordo was well hidden underground, but you cannot compare Fordo to our missile-cities; the enemy can never harm those places and this is what makes our force in dissuasion.”

Hajizadeh did not, however, point to the revealed information on those “missile-cities,” or on the link between those cities and the missile attack on Saudi facilities.

Cruise missiles built on North Korean designs were launched during the attack on September 14. Those missiles are fabricated in the Parchin facilities according to the NCRI, which has also revealed satellite photos of the location.

Hajizadeh is on the public record about having been asked by the regime’s supreme leader Ali Khamenei, ten years ago, to increase precision in missile models in order to let them hit their targets thousands of kilometers away within ten meters of the designated target.

“I thought 30 meters would be great,” affirmed Hajizadeh.

“But he was asking for less error, so we took the charge.”