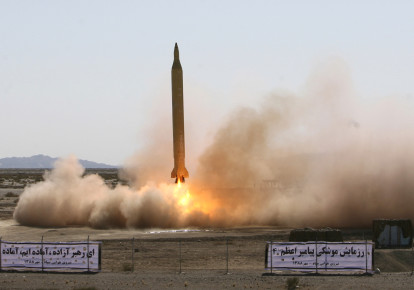 According to Radio Farda, Tansim also reported that two out of the 15 missiles that were fired at Ain al-Assad airbase in Iraq and the Erbil airport in Iraqi Kurdistan targeting US troops fell on the republic’s territory.

The IRGC has claimed for the past six years that it has built three underground “missile cities,” showing tunnels packed with solid-fuel rockets, as well as mid-range ballistic missiles.

The recent conflict between the US and Iran in Iraq that was sparked by the assassination of IRGC Quds Force Commander Qasem Soleimani led to a rise in tensions across the Middle East, with many fearing further developments that may lead the region into war.

Following last week’s ballistic missile attack, Iranian generals warned that “a tsunami will sweep away all US bases.” Iranian state TV said that “Iran has 80 million inhabitants,” announcing that “based on the Iranian population, we want to raise $80 million [as] a reward for those who get close to the head of [US] President [Donald] Trump.”

The unveiling of the republic’s underground missile depot came after France, Britain and Germany formally triggered the dispute mechanism in Iran’s nuclear deal on Tuesday, formally accusing Iran of violating the agreement.

The countries emphasized that they are “not joining a campaign to implement maximum pressure against Iran,” adding that they hope to “bring Iran back into full compliance with its commitments under the JCPOA [nuclear deal].”

German Foreign Minister Heiko Maas said it was important to save the deal “because it prevents Iran from getting a nuclear bomb.” Israeli military intelligence reported that the Islamic Republic would be able to develop a nuclear bomb within a year.

Former deputy director-general for safeguards at the International Atomic Agency said last week that from the end of January, Iran will have approximately two months to break out to a nuclear bomb — a far shorter estimate than the one set by Israeli intelligence.

Also last week, Iran threatened Greece for possibly joining a US-led coalition against the republic following Greek Prime Minister Kyriakos Mitsotakis’ statement saying “We are allies with the US, so we stand by our allies through difficult times.”

“The Islamic Republic of Iran has made it very clear that in the event of a US-led war against the country, the concession of [military] bases by any country to the American invader will be considered a hostile act and Iran reserves the right to respond in a clear and decisive manner,” Iran’s embassy in Greece said.

Pro-Iranian militias have been attacking US interests in Iraq including the US embassy in Baghdad’s fortified Green Zone for several weeks, with the latest attack being a “fierce” rocket attack on Tuesday. Five rockets were launched toward US army base Camp Taji. No casualties have been reported.

On Tuesday evening, a Syrian Arab Army source cited by state news agency SANA blamed the Israeli Air Force for an airstrike on the T-4 military airbase in northern Syria.

Formally known as the Tiyas Military Airbase, T-4, a frequent target of alleged Israeli airstrikes in the country, is used by the Syrian Arab Air Force and IRGC’s Quds Force to conduct military operations.