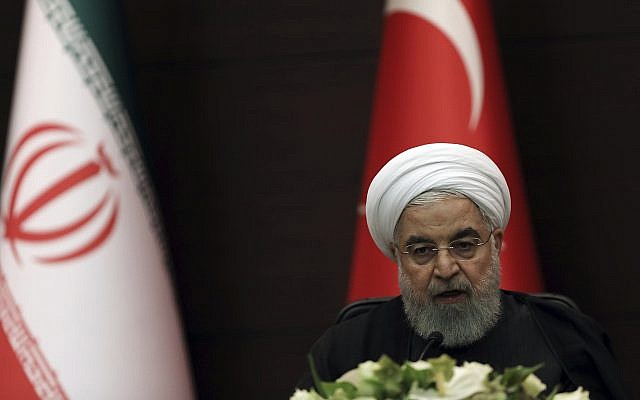 Iran’s President Hassan Rouhani said Wednesday that Yemenis targeted Saudi oil installations as a “warning” about a possible wider war in response to the kingdom’s US-backed intervention in their conflict-ravaged country.

Washington has said it has proof that Saturday’s attacks on Saudi oil installations originated in Iran.

In the video released by state TV, Rouhani did not directly address US and Saudi allegations that Iran was behind the attack Saturday, but his comments constituted an implicit denial of responsibility.

A Saudi-led coalition has been battling Yemen’s Iranian-backed Houthi rebels since March 2015.

US Secretary of State Mike Pompeo was to fly to Saudi Arabia Tuesday to discuss possible retaliation.

A US official, speaking on condition of anonymity, told AFP that the Trump administration has concluded that last weekend’s attack involved cruise missiles from Iran and that evidence would be presented at the UN General Assembly next week.

Yemen’s Houthi rebels claimed responsibility for the Saudi oil installation attacks, which halved output from the petro-state, a close ally of Washington.

But a senior US administration official cast doubt on that claim, saying that while the Houthis said they used 10 drones, one Saudi oil facility was hit “at least 17 times,” and another twice by “precision-guided munitions.”

On Monday the Wall Street Journal reported that Washington has provided Saudi Arabia with an assessment that Iran was behind the attack, but the Saudis were not convinced there was enough evidence that it came from Iranian territory.

US President Donald Trump has said that the United States is ready to help Saudi Arabia, but will wait for a “definitive” determination on who was responsible.

The Houthis’ war with Saudi-backed forces in Yemen has turned the impoverished nation into a proxy battlefield for bitter regional rivals Tehran and Riyadh.

The increasingly complex conflict dovetails with the Trump administration’s attempt to curb Iranian power through a “maximum pressure” campaign of crippling economic sanctions.

Trump began that campaign after unilaterally pulling out of a 2015 international deal meant to reward Iran for allowing restrictions on its nuclear industry.

He says that Tehran is secretly cheating and trying to build nuclear weapons and must be stopped.

The weekend attacks in Saudi Arabia have spiked tensions and prompted concerns about an escalation. Conflict in the Gulf region could put a large portion of global energy supplies at risk.