Iranian general: Our missiles are aimed at 21 US bases in the region 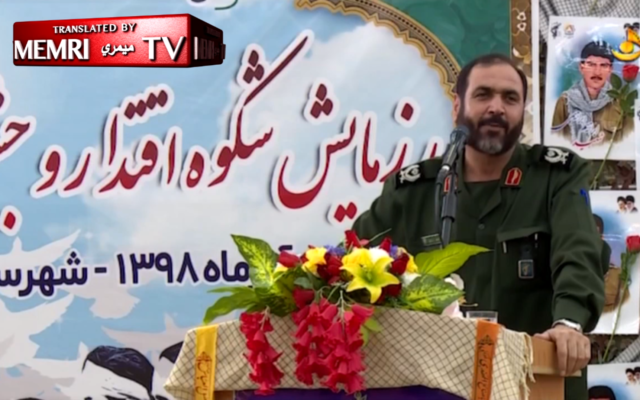 An Iranian general has warned that Iran’s missile arsenals are aimed at 21 American military bases in the Middle East and the country is prepared for “the greatest war against the greatest enemy.”

In a November 29 speech, at an event in the southern city of Bushehr commemorating 40 years since the establishment of the Basij paramilitary force, Gen. Allahnoor Noorollahi also said that Iran had the ability to raze Haifa and Tel Aviv to the ground.

Noorollahi serves as a top adviser to the commander of the Islamic Revolutionary Guard Corps Officers College. His speech was broadcast on Bushehr TV, and was reported on and translated by the Middle East Media Research Institute.

“Iran is the world’s fourth [strongest] missile power after the US, Russia, and China,” he boasted in his comments, which were translated Sunday by the MEMRI watchdog group.

Noorollahi claimed the NATO military alliance had purportedly warned that Iran could launch as many as 20,000 missiles per day, but that the number could actually be higher in a future conflict with the United States.

“Unfortunately, some Gulf countries have become a military camp for our enemy. I must say this, 21 of their bases constitute targets for our missiles. NATO itself announced that Iran’s 110 missile bases and launching sites are capable of launching 20,000 missiles per day. This is what the enemy says. They only acknowledge part [of our capability]. When a country reveals not only its underground missile bases but also its missile ‘cities’ to the enemy – this reflects readiness and capabilities.

“It means that we have capability to confront the greatest enemy,” he added, a reference to the US, which the regime has long characterized as its arch-foe and calls the “Great Satan.”

He said America’s regional allies were not Iran’s enemies, and reiterated the claim by the regime’s Supreme Leader Ali Khamenei that the Islamic Republic was capable of “razing” Tel Aviv and Haifa to the ground.

“Saudi Arabia and the region’s countries are neither on our level nor are they our enemies. Our enemy is the [country] that came to Kuwait and built six large bases there. This enemy knows that if it transgresses… We do not want to cause harm to our neighbors unless we are forced to,” he said.

Noorollahi’s comments came just days after the Revolutionary Guard’s top commander, Gen. Hossein Salami, threatened to destroy Israel, the US and other countries, as he addressed a pro-government demonstration denouncing last month’s violent protests over a fuel price hike.

Salami accused the US, Britain, Israel and Saudi Arabia of stoking the unrest.

“If you cross our red line, we will destroy you,” he said. “We will not leave any move unanswered.”

“We have shown restraint … we have shown patience towards the hostile moves of America, the Zionist regime (Israel), and Saudi Arabia against the Islamic Republic of Iran,” Salami added, according to Reuters.

He said if Iran decides to respond, “the enemy will not have security anywhere,” adding that “our patience has a limit.”

Iran has accused the US, Israel and Saudi Arabia of engineering large protests sparked by a 200 percent jump in the price of gasoline.

Officials said the demonstrations turned violent because of the intervention of “thugs,” backed by royalists and Iran’s arch-enemies.

At a pro-government rally last Monday, which state TV referred to as the “Rise of the people of Tehran against riots,” protesters carried signs bearing traditional anti-US slogans.

But speakers also criticized President Hassan Rouhani’s administration for the way the fuel price hike was implemented, even as they called for capital punishment for rioters and further restrictions on social media platforms.

During the violence, dozens of banks, gas pumps and police stations were torched across the Islamic Republic. The United Nations said it feared that dozens died, while Amnesty International said more than 100 were believed to have been killed.

Iran has been gripped by an economic crisis since the US restored painful sanctions after withdrawing from the 2015 nuclear deal.

At a meeting Monday with family members of a security officer who was killed in the violence, Salami vowed that Iran will “take revenge for the security defenders on the US, the UK, Israel and their mercenaries inside Iran,” the official IRNA news agency reported.