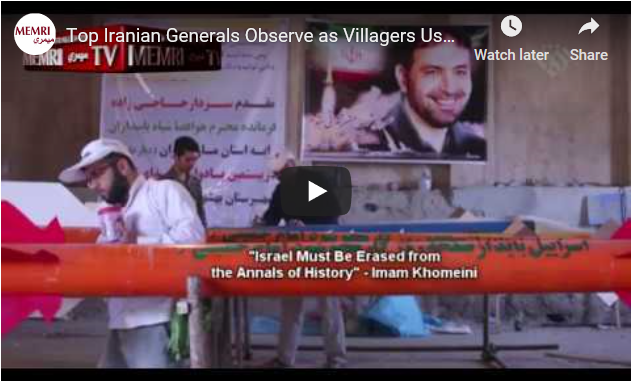 An Iranian TV station has aired a documentary on a village in northern Iran staging a mock bombing of Israel, the White House and a US Navy ship, as top Iranian generals watched.

The segment from Ofogh TV, which was broadcast on June 1, documents an annual display in the village of Kiasar, a small community east of Tehran, according to a translation from the Middle East Media Research Institute monitoring group.

The clip opens with men building the mock missiles in a workshop, including painting a quote on the weapons from the late Ayatollah Ruhollah Khomeini reading, “Israel must be erased from the annals of history.”

The villagers then drive the brightly painted missiles through the countryside on trucks and attach them to zip lines.

A military officer identified as General Ali Fazli of the Islamic Revolutionary Guard Corps says of the display, “This symbolic missile demonstrates their willpower and their faith. In fact, if there is a need one day, this place will be transformed into a real base for the defense of the religion of God.”