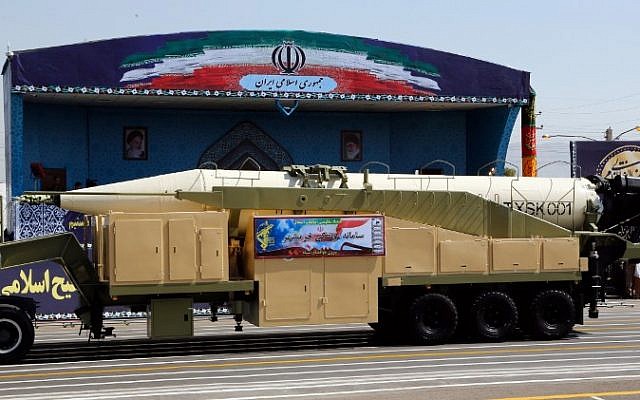 TEHRAN (AFP) — President Hassan Rouhani vowed on Friday that Iran would boost its ballistic missile capabilities despite criticism from the United States and also France.

His comments came as Iran displayed a new missile at a military parade marking the anniversary of the outbreak of its devastating 1980-1988 war with Saddam Hussein’s Iraq.

“Whether you like it or not, we are going to strengthen our military capabilities which are necessary for deterrence,” Rouhani said in a speech broadcast live on state television.

Iranian President Hassan Rouhani delivers his speech during the annual military parade marking the anniversary of the outbreak of its 1980-1988 war with Saddam Hussein’s Iraq, on September 22, 2017 in Tehran. (AFP/stringer)

“We will strengthen not only our missiles but also our air, land and sea forces… When it comes to defending our country, we will ask nobody for their permission.”

Criticism by the Donald Trump administration of a 2015 nuclear deal between Iran and major powers, including the United States, has focused heavily on Tehran’s continuing missile program.

Tehran says that the missiles are entirely legitimate under the terms of the deal as they are not designed to carry a nuclear warhead.

At the UN on Wednesday, Rouhani said Iran has never sought nuclear weapons, and that its military arsenal, including its missiles “are solely defensive deterrence.”

But Washington says they breach the spirit of the agreement as they have the potential to carry a nuclear warhead and has imposed new sanctions over Tehran’s continuing launches and tests.

There has been some sympathy for the US position from France, whose President Emmanuel Macron said the deal could be expanded to ban missile tests and cut a sunset clause in the nuclear agreement that would see Iran resume some uranium enrichment from 2025.

But even he insisted that the core deal not be dumped.