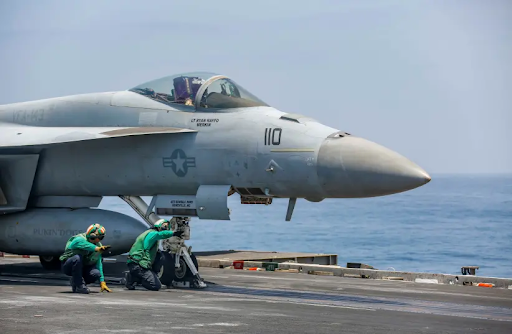 Spotted off the coast of Iran in recent days is a mock-up of a US Aircraft Carrier. The giant fake ship was seen near Bandar Abbas port, an area where the Islamic Revolutionary Guard Corps operates, and it is thought to be for training or propaganda. This is one of several such mock-ups Iran has built in the last decade to show off their capabilities fighting the US “great Satan,” as the regime refers to America.

In February 2015 Iran fired cruise missiles at another model and blew part of it up. Iran said that version was 202 meters long. In March 2014, when that earlier fake aircraft carrier was spotted, Iranian media tried to spin it as a “movie set.” Later it was used for target practice.

It seems that the original 2014 model, the “movie set” was the same one strafed and attacked in 2015 and that it was towed to port on the barge it rests on. Then in October and November last year, amid US tensions, the Iranians began repairs. It was seen by satellite in December 2019 and was undergoing repairs.