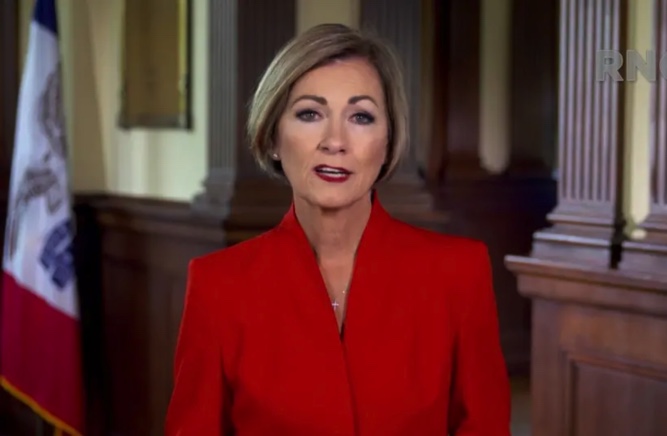 Iowa’s governor signed bills into law this week codifying a definition of antisemitism for the state and restricting state business with companies that boycott Israel.

One of the two bills signed by Republican Kim Reynolds on Wednesday calls for the state to adopt the International Holocaust Remembrance Alliance’s definition of antisemitism in discrimination and anti-bias training.

The other builds on an existing section of the state code that prohibited it from investing in “companies that boycott Israel,” by expanding the definition of a “company” to include subsidiaries and parent companies.

“Today we express Iowa’s enduring support for the State of Israel and our categorical rejection of antisemitism,” Reynolds said in a statement. “Together, these bills send an important message: Iowa continues to stand shoulder to shoulder with the State of Israel, one of America’s most important and reliable allies while fighting all forms of religious and ethnic discrimination.”

The bills fall into two separate but related trends of legislation. The IHRA’s 2016 working definition of antisemitism, while controversial for including certain criticisms of Israel, has also been adopted by more than 800 entities worldwide, including 200 just last year, according to a recent study by the Combat Antisemitism Movement and Tel Aviv University. Its use in anti-bias training, as is proposed in the new Iowa law, has proven popular even as some Republicans are seeking to outlaw anti-bias training altogether.