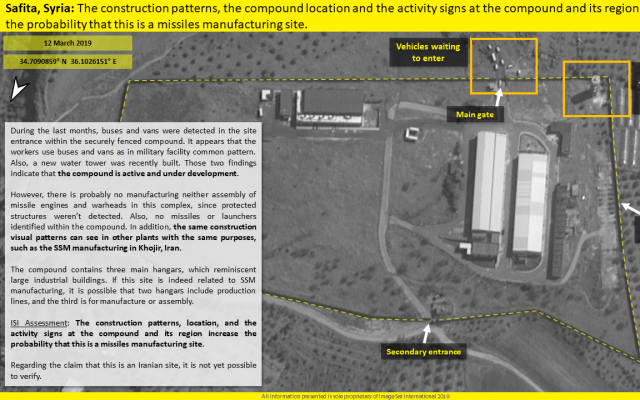 New satellite images give credence to reports that a new factory in Syria’s northwest is a facility for the production of surface-to-surface (SSM) missiles, an Israeli intelligence-gathering firm said Wednesday.

“The construction patterns, the compound’s location and the signs of activity at the compound and its [surrounding area] increase the probability that this is a missiles manufacturing site,” said the company, which interprets visual intelligence.

It noted that “The compound contains three main hangars which are reminiscent of large industrial buildings. If this site is indeed related to SSM manufacturing, it is possible that two hangars include production lines, and the third is for manufacture or assembly.”

It also said that vehicle activity at the site, particularly the use of buses and vans by workers, followed the pattern of operations at military facilities.

And tracks seen in a nearby area were compatible with those made by SSM launcher vehicles, ISI said.

The plant near the city of Safita was first reported upon last month by Channel 12 news, which said Israeli officials believe it is a precision missile factory being constructed by Iran in cooperation with the Syrian government and Lebanese terror group Hezbollah.