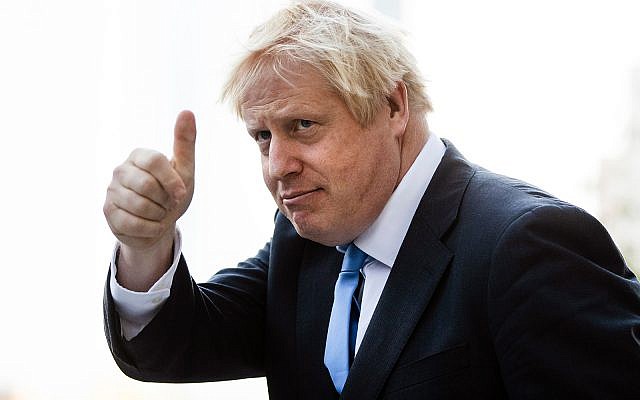 British Prime Minister Boris Johnson vowed to protect Jews against anti-Semitism in the United Kingdom, in a video message to Jews ahead of the Rosh Hashanah holiday on Sunday evening.

“I will always be there to defend you against the shameful anti-Semitism that we are increasingly seeing and which is such a terrible blight on our country,” he said.

According to the Community Security Trust, Britain’s primary anti-Semitism watchdog, the first half of 2019 saw a precipitous rise in incidents targeting members of the UK Jewish community.

Britain’s opposition Labour Party has been widely criticized — including from within its own ranks — for allegedly allowing anti-Semitism to spread in the party. Labour has grappled with anti-Semitism accusations since its far-left leader Jeremy Corbyn was elected party chief in 2015. Fresh scrutiny arose this year after a BBC program in which a number of former party officials accused him and his allies of interfering in efforts to address the issue.

In the latest incident, a veteran Jewish lawmaker in the party, Dame Margaret Hodge, who last year called Corbyn an anti-Semite, will have to run in a local primary to keep her seat after losing a key party vote Saturday.

In his Rosh Hashanah video message, Johnson said the Jewish new year was an opportunity to “remember and reflect on the fantastic and enormously varied contribution [Jewish citizens] make to our country.”

“We see so many Jewish charities and organizations and philanthropists. Whether [they’re] helping others in the Jewish community or in wider society. From building bridges with other communities to helping out those with the greatest need.”

Corbyn put out his own video wishing Jews a happy new year and warning of the danger that climate change poses to the growth of apples and honey, which are traditionally eaten on Rosh Hashanah. He did not mention anti-Semitism.

Johnson was one of several world leaders who wished Jews around the world a happy new year ahead of the Rosh Hashanah holiday, among them Italian President Giuseppe Conte and Brazilian President Jair Bolsonaro.

“To the entire Jewish people celebrating [the] 5780 [Hebrew year], a big hug from the Brazilian people,” said Bolsonaro in a tweet.

Emmerson Mnangagwa, the president of Zimbabwe, wished “our Jewish friends around the world” a happy new year and posted a photo to his Twitter account of him shaking hands with Israel’s Foreign Minister Israel Katz at the UN General Assembly last week.

US President Donald Trump spoke to nearly a thousand Jewish leaders on Friday, wishing them a happy new year and vowing to be tough with Iran while doing all he could to avoid military conflict.

“Our country is reminded of the infinite ways Jewish families uplift our nation,” Trump said in the 13-minute call early Friday afternoon. “You embody the American dream.”

He also put out a statement Sunday ahead of the start of Rosh Hashanah in the US.