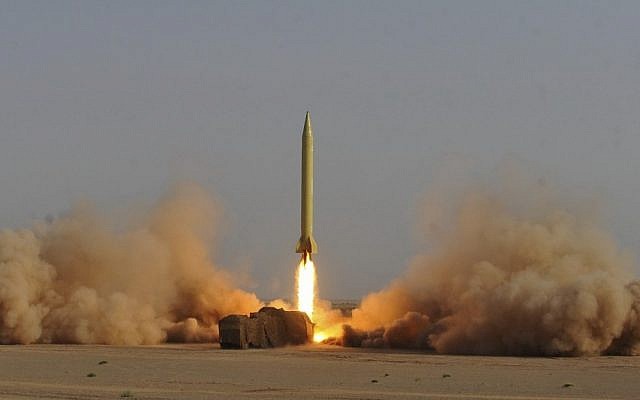 After openly breaching the terms of the nuclear deal, Iran this week also conducted a medium-range ballistic missile test in violation of Security Council resolutions, a report said late Thursday.

The country tested a Shahab-3 missile on Wednesday, the New York Times reported, citing an unnamed US military official.

It was launched from southern Iran and flew some 1,100 kilometers, landing east of Tehran, the report said.

The military source said the missile did not pose a threat to US or Western assets in the region, and that US officials had closely monitored the activity that preceded the launch.

The report said that the missile test “appears to be a political statement by Iran, acting both as a carefully calibrated effort at escalation — and as a message to Europe,” and that it “seemed meant to drive home the point that Iran had no intention on giving up on its own missile fleet.”

Earlier this month, the United Nation’s nuclear watchdog confirmed that Iran had enriched uranium at a level higher than the limit set in the landmark 2015 nuclear deal, which US President Donald Trump left last year. European signatories have since been trying to save the pact.

In pulling out of the deal, Trump in part faulted the accord for not addressing Iran’s ballistic missile program. The US fears Iran could use its missile technology and space program to build nuclear-capable intercontinental ballistic missiles, something Tehran denies it wants to do.

However, a UN Security Council resolution was passed at the time of the deal’s signing prohibiting Iran from testing ballistic missiles capable of carrying nuclear warheads. The Shahab-3 is widely believed to be capable of delivering a nuclear warhead.

Iranian Foreign Minister Mohammad Javad Zarif last week seemed to indicate Tehran’s missile program was up for negotiations, saying in an NBC News interview that if the US wants to talk about Iran’s missiles, “they need first to stop selling all these weapons, including missiles, to our region.”

Zarif appeared to suggest a high price for such negotiations — the halt of American arms sales to both Saudi Arabia and the United Arab Emirates, two key US allies in the Persian Gulf. He said the UAE spent $22 billion and Saudi Arabia $67 billion on weapons last year, many of them American-made, while Iran spent only $16 billion in comparison.

Iran later said the remarks were meant to challenge Washington’s arms sales policy to the region — not to indicate a readiness for any such talks.

Iran has long rejected negotiations over its missile program.

Last week, Prime Minister Benjamin Netanyahu said some countries will only wake up to the Iranian threat when nuclear missiles fall on European soil, after the European Union declared that the recent Iranian violations of the nuclear deal were not significant enough to necessitate reimposing sanctions.

An Iranian clergyman looks at domestically built surface to surface missiles displayed by the Revolutionary Guard in a military show marking the 40th anniversary of the Islamic Revolution, at Imam Khomeini Grand Mosque in Tehran, Iran, February 3, 2019. (Vahid Salemi/AP)
Tensions have soared in the Persian Gulf in recent months, with the US calling off airstrikes against Iran at the last minute after Tehran downed an American drone, and Washington blaming the Islamic Republic for a series of attacks on tanker ships.

Iran has faced a variety of economic sanctions by the West since its 1979 Islamic Revolution and the takeover of the US embassy in Tehran. That has cut into its ability to buy advanced weaponry abroad. While Gulf Arab nations have purchased advanced fighter jets, Iran still relies on pre-1979 US fighter jets, as well as aging Soviet MiGs and other planes.

Facing that shortfall, Iran instead invested heavily in its ballistic missile program, which remains under the control of the Iranian paramilitary Revolutionary Guard, which answers only to its supreme leader, Ayatollah Ali Khamenei.

Khamenei reportedly has restricted the range of ballistic missiles manufactured in Iran to 2,000 kilometers (1,240 miles). While that keeps Europe out of range, it means the Iranian missiles can hit much of the Middle East, including Israel and American military bases in the region. The Islamic Republic frequently threatens to annihilate Israel.