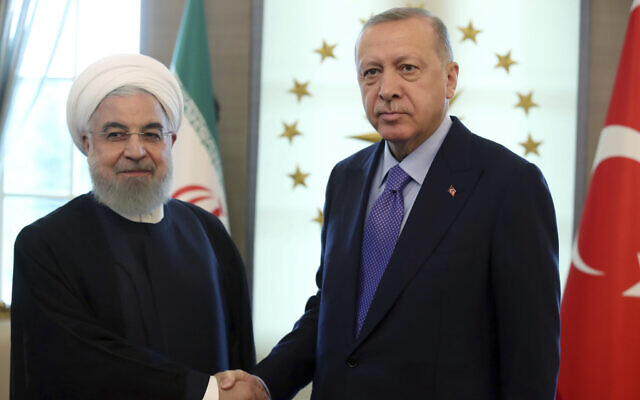 Despite officially maintaining diplomatic ties, Israel’s military has added the Republic of Turkey to its list of threats in an annual assessment for the coming year, in light of the country’s growing aggressiveness in the region, The Times of Israel learned Tuesday.

This is the first time Israeli Military Intelligence has included Turkey on the list.

Relations between Israel and Turkey have been increasingly strained under Turkish President Recep Tayyip Erdogan, who routinely speaks out against the Jewish state and allegedly allows Palestinian terror groups to operate freely in his country.

Though in its assessment, which is presented to Israeli decision-makers each year, the military does not see a direct confrontation with Turkey in the offing in 2020, the country’s increasingly bellicose actions in the region have made it one of the top dangers to watch for the coming year.

The assessment did not detail any specific threat from Turkey toward Israel, but rather indicated that policies pursued by Erdogan, whose Islamist party is allied with the Muslim Brotherhood, was behind the cause for concern. Those issues were not inherent to Turkey’s outlook and would not necessarily outlive Erdogan, the assessment indicated.

In recent months, Ankara has been stepping up its expansionism, conducting military operations in next-door Syria and proposing to establish a gas pipeline to Libya, despite the fact that this would likely violate the territorial waters of Israeli ally Greece.

In an interview with Channel 13 last month, Foreign Minister Israel Katz said it was Israel’s “official position” that such a Turkish-Libyan pipeline would be illegal.

“But that doesn’t mean we’re sending battleships to confront Turkey,” he said.

In October, following a Turkish invasion of Syria as part of Ankara’s fight against Kurdish groups there, Israeli ambassador to the United Nations Danny Danon told the UN Security Council’s monthly Middle East meeting that Erdogan “has been destabilizing the region through violence and supporting terror organizations,” adding that Turkey’s “shocking” incursion into Syria had come as no surprise.

Danon said Erdogan was dragging his country down an “imperialist path. He threatens journalists, persecutes religious minorities and promotes anti-Semitism.”