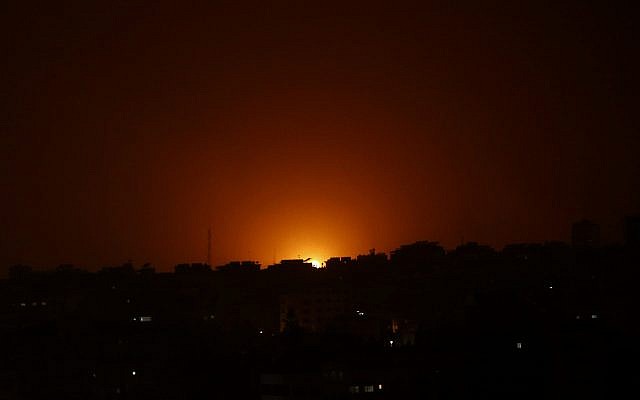 The latest tit-for-tat fighting between Hamas and Israel continued throughout the night Thursday with Israeli planes striking a round of fresh targets in the Gaza Strip belonging to the terror group after a second rocket was fired from the coastal enclave toward Israeli towns.

The IDF confirmed that it has struck several “terror bases” in the Strip in the second set of sites targeted by airstrikes since midnight Wednesday.

The round of raids came in response to a rocket fired from the Gaza Strip toward Israel early Thursday morning, the IDF said. That attack came shortly after Israeli planes struck Hamas naval targets off the coast of the Strip, following an earlier rocket attack which landed in an open field in Israel.

The IDF said that warning sirens were activated near the Gaza border. There were no injuries in the rocket attacks.

The army said earlier that fighter jets and aircraft hit several “sea-based bases” in the north belonging to Hamas. The army said the strikes were in response to the rocket attack, as well as “continuing terror activities from the Strip.”

An army statement added, “The IDF will continue to oppose attempts to harm Israeli civilians and considers the Hamas terrorist organization responsible for what happens in and out of the Gaza Strip. ”