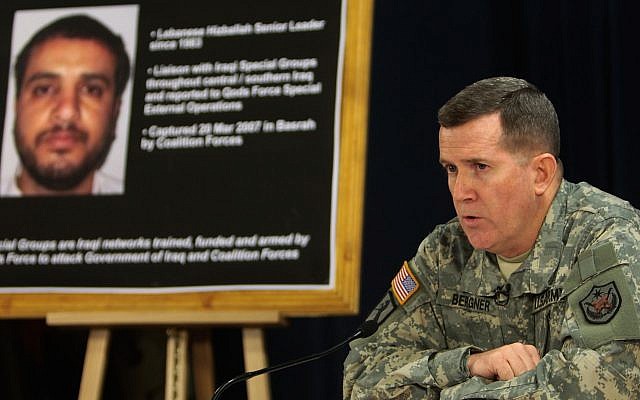 The Israel Defense Forces said Wednesday that it had exposed a Hezbollah terror cell established in a border village in the Syrian Golan Heights and vowed to prevent the Lebanese group from operating against Israel from Syrian soil.

The IDF said the cell was comprised of Syrians, but led by Lebanese and “masterminded” by a man it identified as Ali Musa Daqduq.

Daqduq is wanted in the US for attacks against US forces in Iraq including planning an attack in  Karbala in 2007, which resulted in the deaths of five US soldiers.

According to the US Department of the Treasury, Daqduq has served “as commander of a Hezbollah special forces unit and chief of a protective detail for Hezbollah Secretary-General Hassan Nasrallah.”

According to the IDF, Daqduq has now taken up a new position, trying to establish Hezbollah observation posts against Israel on Syrian soil.

“We have a clear message, we are not going to allow Hezbollah to establish a terror infrastructure in Syria capable of harming Israeli civilians,” the army said, adding that it also held the Syrian government responsible for all actions emanating from Syrian soil.