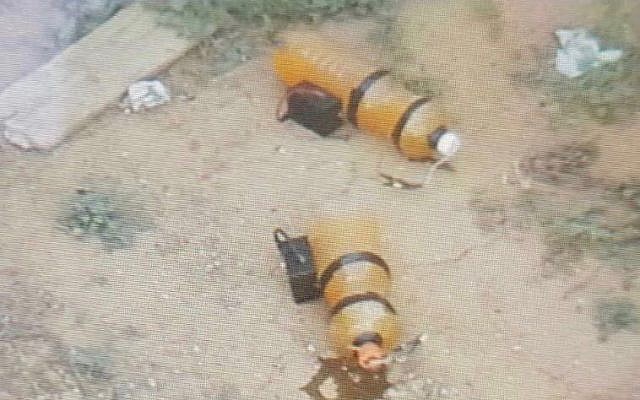 Earlier, soldiers monitoring closed circuit cameras spotted the three men as they broke through the border, and then later crossed back into Gaza, the army said.

An IDF tank opened fire at them, according to Palestinian media.

On Sunday night, the army said soldiers found the two bombs, which appeared to be rigged out of plastic drinking bottles full of an explosive liquid with a detonator.

“The Israel Defense Forces sees with severity any attempt to harm or destroy the security and defense infrastructure and will not allow the border area to become a combat zone,” the army said in a statement.

The military blamed the Hamas terrorist group for the attempted IED attack.

Also on Sunday, Israeli troops arrested an unarmed Palestinian man who crossed into Israeli territory from the Gaza Strip. He was handed over to the Shin Bet security service for questioning.

The infiltrations were the latest incident in a series of escalating events along the Gaza border.

On Friday, tens of thousands of Palestinians gathered along the security fence, burning tires and throwing firebombs and rocks at Israeli soldiers, who responded with tear gas and live fire, the army and witnesses said, as Palestinians held a second “March of Return” protest. Nine Gazans were killed and over 1,000 wounded in the day’s clashes.

The IDF said it thwarted multiple efforts on Friday to breach the border fence — and that it used live fire to do so in some instances — as well as attempts to activate bombs against the troops under the cover of smoke from the protests.

The week before, more than 30,000 people participated in a similar demonstration along the border, which also included multiple attempts to tear down the security fence and to plant explosives alongside it, according to the IDF.

Read More: The Time of Israel