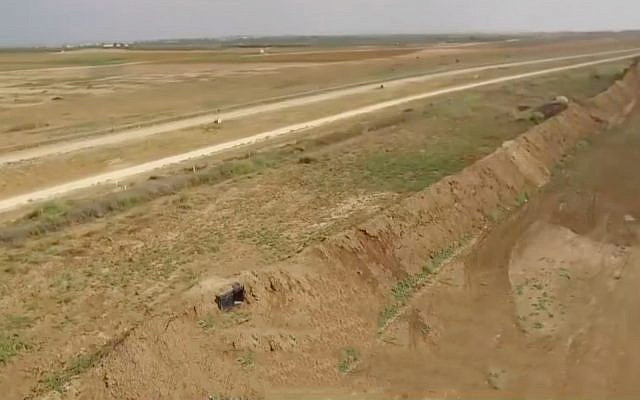 Israel is nearing completion of new defense works being constructed on the Gaza border in response to weekly border riots, threats from anti-tank missiles and other terror attacks, according to a Channel 13 report broadcast on Wednesday.

The project includes defenses against missiles and improved sniper posts, which have been better fortified, placed higher up and in more strategic locations.

The new defenses were built alongside the underground barriers which protect against terror tunnels, and a high fence which is expected to be completed in mid-2020.

“Once we’re protected here, we’ll control the enemy by observing and he’ll have less ability to harm us. Every part of the defenses are connected in order to create a complete operational system,” said Major Yisrael Peretz, an officer in the Combat Engineering Corps who was assigned to the project.

The new fortifications will also protect area civilians and roadways. The first installment was a wall protecting the access road to Kibbutz Erez, where a civilian was killed by an anti-tank missile in May.

Israeli soldiers have also come under sniper fire from Gaza.

A Gaza sniper shot an IDF officer in the head in January during a border riot. The bullet struck the officer’s helmet, which saved his life.

In July 2018, a sniper shot in the chest and killed an infantryman from the Givati Brigade.

The new barriers aim to fill what some military officials viewed as a gap in the country’s defenses in the area against Gaza terror groups, especially Hamas, which rules the Palestinian enclave, and the Iran-backed Palestinian Islamic Jihad.

Both have devoted vast resources in the impoverished territory to developing methods for circumventing Israel’s border defenses in a bid to carry out attacks against civilian populations and military targets inside Israel. These efforts have included the construction of dozens of underground tunnels into Israel, the deployment of thousands of hidden rocket launchers throughout the Strip, and plans for infiltration into Israel by armed assailants.

In response, Israel has developed new defensive technologies in recent years, including the Iron Dome missile defense system, an underground tunneling barrier now under construction, and an array of special and mostly secretive detection technologies deployed along the border.