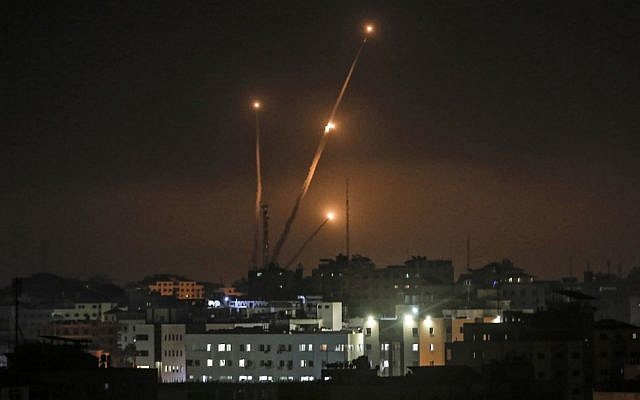 Palestinian terrorists in the Gaza Strip fired a rocket toward southern Israel on Wednesday night, the army said, prompting a retaliatory Israeli raid.

The projectile failed to cross the border and landed inside the enclave, according to the Israel Defense Forces.

In response, an Israeli military aircraft bombed a Hamas observation post along the border of the northern Gaza Strip, the IDF said.

The rocket launch from Gaza triggered sirens in the Israeli community of Netiv Ha’asara, north of the Strip.

The attack interrupted a night-time swimming event that the community was hosting at the time, sending dozens of children rushing to bomb shelters.

“The kids ran from the water straight to the shelter, they were very afraid. There were three of us adults helping them out,” Netiv Ha’asara resident Yifat Ben-Shushan told the Walla news site.

The rocket attack came amid a flurry of exchanges of fire and mutual threats between Israel and terror groups in the Gaza Strip. Israel has accused the Iran-backed Palestinian Islamic Jihad of being behind the recent violence emanating from the enclave.

On Tuesday, terrorists in the Strip fired four mortar shells toward Israel. Three landed on the Gaza side of the border and one struck an open field inside southern Israel. In response, an Israeli aircraft bombed a Hamas observation post east of Juhor ad-Dik in the central Gaza Strip, according to the Israel Defense Forces.

A delegation from the Islamic Jihad is expected to head to Cairo in the coming days as well.

Since the start of August, an uptick in rocket fire and attempts by Palestinian gunmen to cross from Gaza into Israel have been met with IDF airstrikes on Hamas targets, threatening a fragile ceasefire between Israel and the ruling terror group.