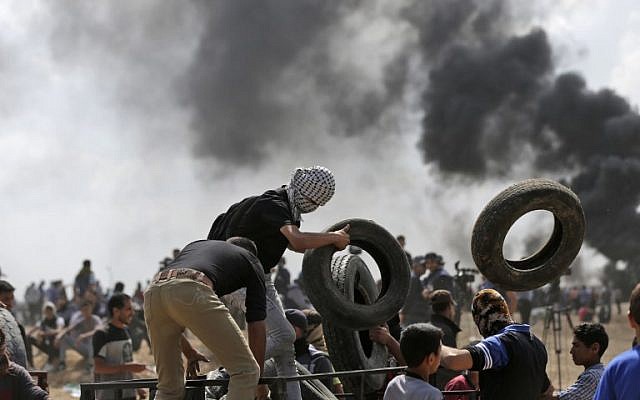 Israeli security forces have recently noticed Hamas sending children as young as eight years old to the front lines of protests along the Gaza-Israel border, the Israel Defense Forces said on Thursday.

They have also lately heard unidentified operatives on loudspeakers promising children at the border NIS 300 ($83) if they get injured, the army said, confirming a previous unsourced report on the Kan public broadcaster.

A Hamas official in Gaza did not respond to a request for comment about whether the terror group sent children as young as eight to the front lines of the demonstrations. He also did not answer whether it had promised kids money for sustaining injuries.

Since March 30, the Hamas terror group, Palestinian political factions, civil society groups and others have organized weekly protests in the border region, which have included many violent acts, including the lobbing of rocks and Molotov cocktails as well as the sabotage of the security fence between Israel and Gaza

They have said the protests aim to achieve the return of Palestinian refugees and their descendants to lands that are now part of Israel, and to pressure the Jewish state to lift its restrictions on the movement of people and goods into and out of the coastal enclave.

Israeli officials hold that the return of Palestinian refugees and their descendants would destroy Israel’s Jewish character. They also maintain that the restrictions on movement are in place to prevent Hamas and other terrorist groups from smuggling weapons into the Strip.