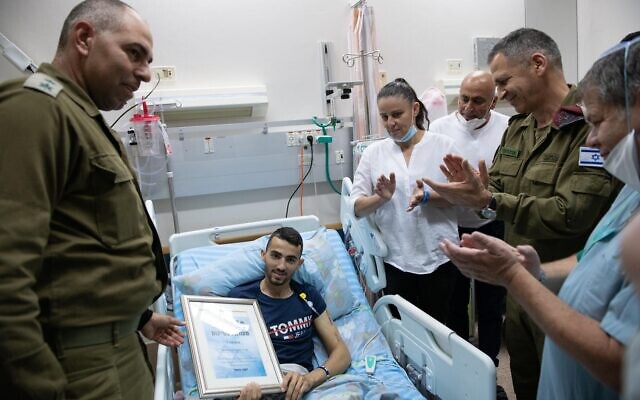 IDF Chief of Staff Aviv Kohavi presented a soldier who lost his leg in a car ramming attack earlier this month with an award of excellence on Wednesday, the military said.

Staff Sgt. Shadi Ibrahim, from the Druze town of Sajur in northern Israel, sustained serious injuries when a Palestinian man rammed his car into him outside the Negohot settlement in the southern West Bank’s Hebron Hills on May 14. Doctors at Beersheba’s Soroka Medical Center were later forced to amputate his leg that was wounded in the attack.

Ibrahim, 20, a combat soldier in the 9th Battalion of the 401st Armored Brigade, was chosen as the recipient of the brigade’s award of excellence prior to the ramming attack. The military said he was picked to receive the award “for his praiseworthy actions.”

“Because of his injuries and surgeries, he could not come to the brigade’s award ceremony last week,” the army said.

As a result, Kohavi and the brigade’s commander, Col. David Songo, presented the award to Ibrahim in the hospital.

Earlier on Wednesday, Ibrahim was also visited in the hospital by the mayor of the Eshkol region, Gadi Yarkoni, who lost both of his legs when he was hit by a mortar shell that was fired from the Gaza Strip during the 2014 war.