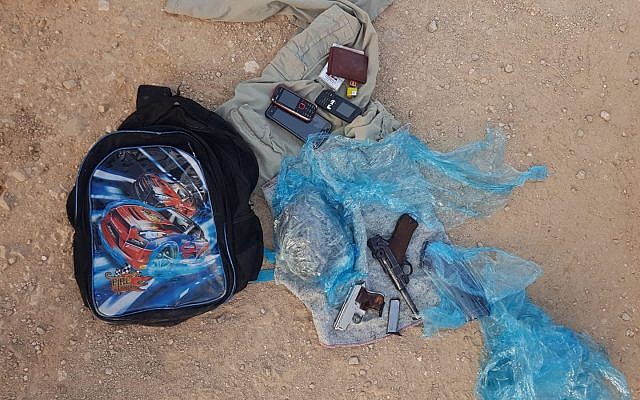 An investigation is underway to determine if they were part of a gun-smuggling operation between Israel and the West Bank or, less likely but still possible, were planning to use the weapons in a terror attack, the officer, Cpt. Tiran Molla, told The Times of Israel.

Soldiers monitoring security cameras in the West Bank’s Efraim Brigade spotted the two men breaching the security fence near the Route 5 highway east of the city of Rosh Ha’ayin.

Molla’s Home Front Command search-and-rescue unit, which is stationed in the area, was called to the scene and arrested the pair inside Israeli territory, he said.

During a search, Molla’s soldiers noticed that the bag the men were carrying was suspiciously heavy.

“I put on gloves and opened the bag — in front of a camera and in front of the suspects. It was a schoolbag, a second-grader’s bag,” Molla said over the phone on Monday night.

Inside the backpack, Molla found two handguns and assorted ammunition. The two men were also in possession of three cellphones and a large amount of cash, he said.