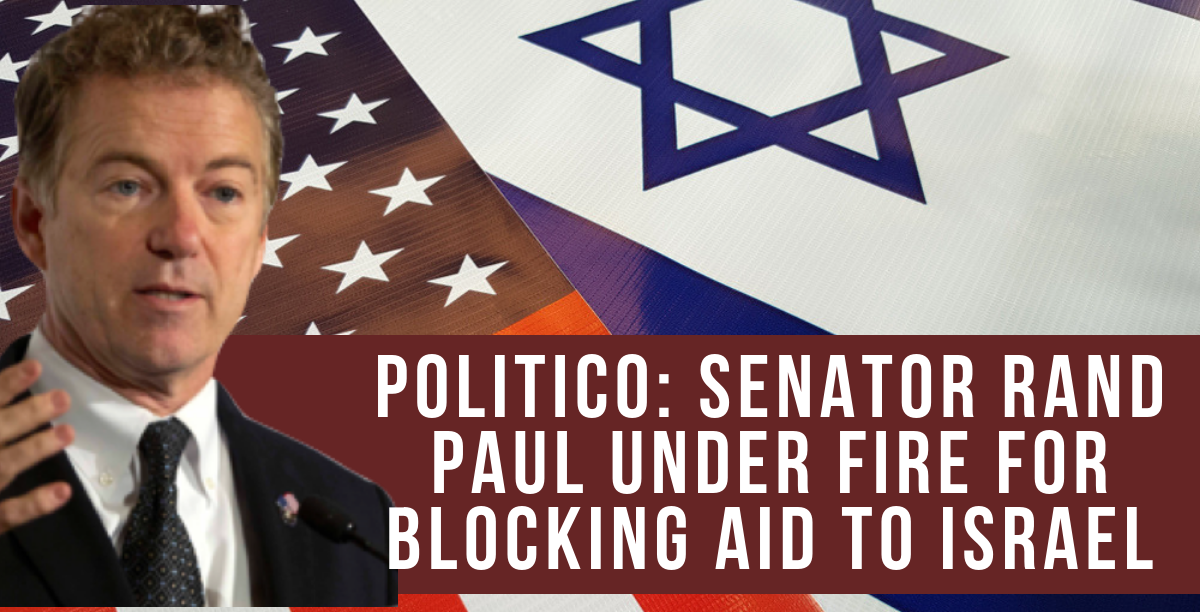 ICYMI: Sen. Paul Under Fire For Blocking Aid To Israel

Senator Rand Paul (R-KY) is putting personal politics ahead of what’s best not only for Israel – a critical U.S. ally – but also for workers and job creators in his home state of Kentucky. As POLITICO’s Foreign Affairs Correspondent Nahal Toosi reported on Friday, Sen. Paul is single-handedly preventing the Senate from passing two pieces of legislation with broad bipartisan support:

“Sen. Rand Paul is infuriating Republicans and Democratsalike by blocking a pair of Israel-related bills, including one authorizing tens of billions of dollars in military aid for the country. … The dust-up is the latest example of how Paul is willing to throw a wrench into routine legislation to uphold his libertarian instincts, which make him skeptical of foreign aid. It also could hurt his already-testy ties to President Donald Trump, who sees the U.S.-Israel relationship as near-sacrosanct.”

Sen. Paul’s actions have even drawn criticism from former Senator Mark Kirk (R-IL), who was the original author of one of the bills: “I encourage the senator to speak with Governor Bevin and Kentucky voters if he doesn’t understand the anti-Semitism behind the BDS movement.”

As Christians United for Israel (CUFI) Action Fund Chairwoman Sandra Parkersaid: “We are deeply troubled by Sen. Paul’s actions. After blocking an aid bill he previously allowed to pass the Senate by unanimous consent, the Senator has now put a hold on the Combatting BDS Act – just days after the Governor of Kentucky signed an executive order prohibiting the state from contracting with companies that boycott Israel. Senator Paul’s actions are contrary to the values of the voters he is supposed to be representing in Washington.”

The CUFI Action Fund launched an ad campaign in Kentucky to drive this message home, asking Kentucky voters: “As rockets rain down on our ally Israel, will Rand Paul stand with Israel, or will he stand in the way?”

To join our effort asking Sen. Paul to remove his hold on the U.S.-Israel Security Assistance Authorization Act, CLICK HERE.

For more information about the ad campaign, CLICK HERE.