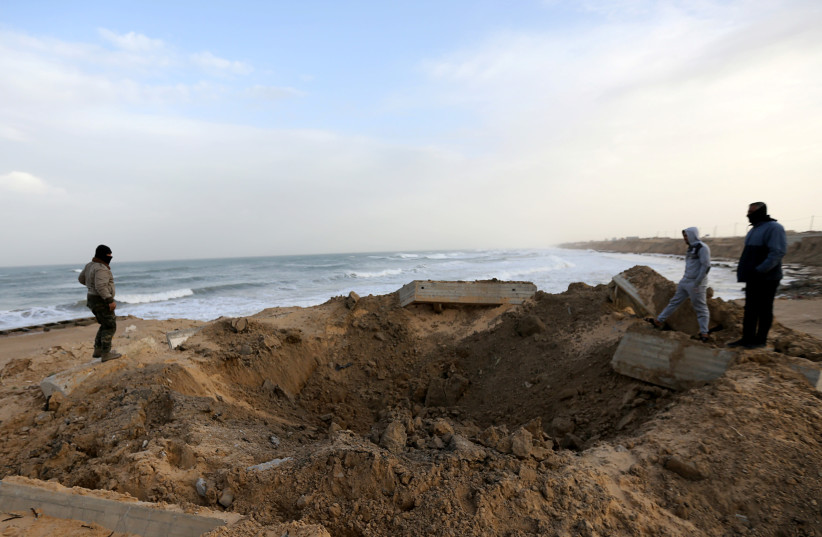 IDF fighter jets and helicopters attacked several Hamas terror targets in the Gaza Strip, including the organization’s military complexes, the IDF Spokesperson’s Unit said on Thursday. The attack was in response to rocket fire from Gaza at Israel on Wednesday night. Prime Minister Benjamin Netanyahu was holding an event in Ashkelon as the rocket sirens went off.

The IDF stressed that “Hamas is responsible for everything occurring in and out of the Gaza Strip and it will bear the consequences for actions against Israeli citizens.”
On Wednesday evening, one rocket was fired into Israel and successfully intercepted by the Iron Dome system causing rocket sirens to blast in Ashkelon and areas north of the city.

Netanyahu was taken off stage to a shelter as the sirens were sounded and Culture Minister Miri Regev took the stage in his place. Multiple other Likud officials who were at the event were not brought to a shelter. Netanyahu returned to the stage shortly afterwards.

A similar incident happened in Ashdod in September when rocket sirens went off as Netanyahu held a campaign event in the city during a rocket onslaught.
In both incidents, live videos on Facebook showed him being interrupted and led off stage.

Gazan reports indicated that Palestinian Islamic Jihad (PIJ) leader Khalil Bathani is the one behind the rocket fire on Wednesday night, according to Channel 12. The rocket fire in September was ordered by former PIJ official Baha Abu Al Ata, who was assassinated in November.

“The person that shot at us before is no longer with us. Whoever shot at us now should pack up his belongings,” said Netanyahu after he returned to the stage on Wednesday. The prime minister continued and spoke about the strength of the State of Israel and the need for faith.

“Again [Labor party leader] Amir Peretz’s Iron Dome saved Netanyahu. The truth needs to be said. Without the Iron Dome that protects the Israeli home front, Netanyahu would already not be prime minister,” said the Labor-Gesher party in response to the attack.

Hamas spokesman Fawzi Barhoum stated that the “Israeli occupation bears full responsibility for the continuation of the escalation in Gaza.” Barhoum added that Israel was exporting its internal crises to the Gaza Strip and stressed that Hamas and the other terrorist groups would continue defending the people of Gaza, “whatever the sacrifices.”
Foreign Minister Israel Katz told Army Radio on Thursday that Israel has returned to the policy of targeted assassinations. “Even now there are intelligence efforts [being carried out] to find out if there is a new official who has taken it upon himself to fire rockets at Israel, and he will be assassinated,” said Katz.

“The situation in which the citizens of Israel are given to the grace of terrorists and the prime minister of the Israeli government can’t tour part of his country is a badge of shame for the security policies in the south and the loss of deterrence that no sovereign state can allow,” tweeted Blue and White leader Benny Gantz on Wednesday night. “We will flip the government, change the policies and return the deterrence and quiet to the residents of the south.”

“There will be a large, complex military operation in Gaza sooner or later,” said Minister of Science and Technology Ofir Akunis to Kan Reshet Bet on Thursday. “We are putting our hand out for peace and in place receive at one point suicide terrorists, at another knives, at another one massacre or another. With terrorist organizations, we need to speak in their language: first of all to land a strong blow that they will not recover from for many years.”
“I suggest looking at the precedent of [former PIJ official] Baha Abu Al Ata: he will not stand alone. In our evaluation, Hamas in this case is not the one who shot the rocket. There is no solution to Gaza except for deterrence that needs reinforcement and refreshment,” said Justice Minister Amir Ohana to Kan Reshet Bet on Thursday.
“We can’t say we don’t want to deal with Gaza right now because we need to prepare for a conflict with Iran,” said MK Yair Golan to Kan Reshet Bet. “They thought this way during the first and second intifadas concerning Syria, and we were hit on the head. We need to act in Gaza in the economic and infrastructure sectors and to arrive at a real agreement.”

Yisrael Beiteinu leader Avigdor Liberman said on Wednesday that this is the “second time this year that Gaza terror activists humiliate the state of Israel,” He also said that, for the second time, the prime minister “fled to a protected shelter.”
Liberman said that “what we have is a surrender to terror, and no new-speak can change the reality we all find ourselves in.”