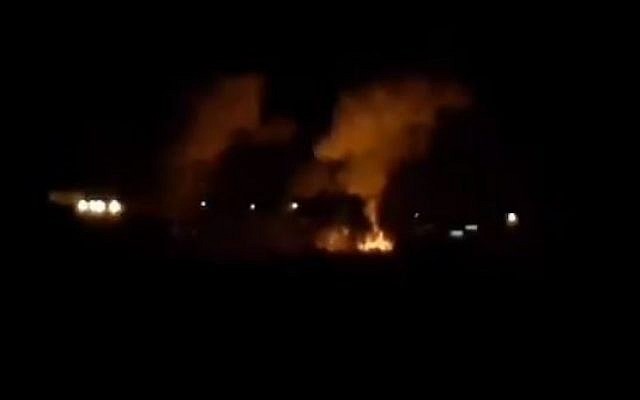 The Israel Defense Forces said it had hit targets on “a military base belonging to the Hamas terror group in northern Gaza, including the office of a Hamas battalion commander.”

Video posted on social media showed a series of explosions inside the coastal Strip.

There were no immediate reports of casualties. Earlier, Palestinian media reported that members of the Gaza-ruling Hamas terror group abandoned their positions in anticipation of retaliatory strikes by the IDF.

The army said the Israeli strikes were in response to the three rockets that were fired into Israel. Two of the incoming projectiles were intercepted by the Iron Dome missile defense system.

One rocket exploded next to the Route 34 highway in southern Israel, sparking a fire, according to local government.

Shrapnel from an Iron Dome interceptor missile struck an empty building in the town of Sderot, causing damage, the municipality said in a statement.

Video from the scene showed the fragments hitting the multi-story building, causing a small explosion and damage to the structure.

One Israeli woman sustained minor injuries as she ran to a bomb shelter and at least six other people suffered anxiety attacks because of the rocket fire, medics said.

Videos posted to social media by residents of the area showed what appeared to be interceptions by the Iron Dome.

The rocket attack came amid heightened tensions throughout the Middle East, as Israel squared off against its nemesis Iran and its proxies in multiple countries.

Tehran provides tens of millions of dollars each year to terror groups in the Gaza Strip, mainly to the Palestinian Islamic Jihad and Hamas, which rules the enclave.

The rocket sirens could be heard in the town of Sderot, and in the surrounding smaller communities of Ivim, Or Haner, Nir Am and Gavim, the army said.

The barrage interrupted a large concert in Sderot, known as Sderot Live, causing a minor panic among attendees and forcing organizers to end the event early.

“Israel Police officers are working to disperse participants of the event in a way that is orderly to prevent danger to human life,” police said.

The IDF on Thursday blamed the Iran-backed Islamic Jihad for the increase in violence from Gaza and called for Hamas to rein in the terror group. “We do not plan to accept terror attacks and rocket fire against our citizens,” the IDF’s Arabic-language spokesperson Avichay Adraee tweeted.

On Friday, Qatari envoy Mohammed Al-Emadi entered Gaza, carrying his latest delivery of cash from Doha as part of an unofficial ceasefire agreement between Israel and Hamas. Distribution of the funds began Sunday morning.

Israel has allowed Qatar to deliver regular infusions of millions of dollars in cash to the Strip to help stabilize the territory and prevent a humanitarian collapse and further violence.

Also Friday, some 8,500 Palestinians took part in protests along the border between the Gaza Strip and Israel, which were some of the largest and most violent in recent months.

A number of the protesters threw explosives, grenades and Molotov cocktails at Israeli troops. The army responded with tear gas and occasional live fire.

The Hamas-run health ministry in Gaza said 122 Palestinians were wounded in the clashes, 50 of them from Israeli fire.