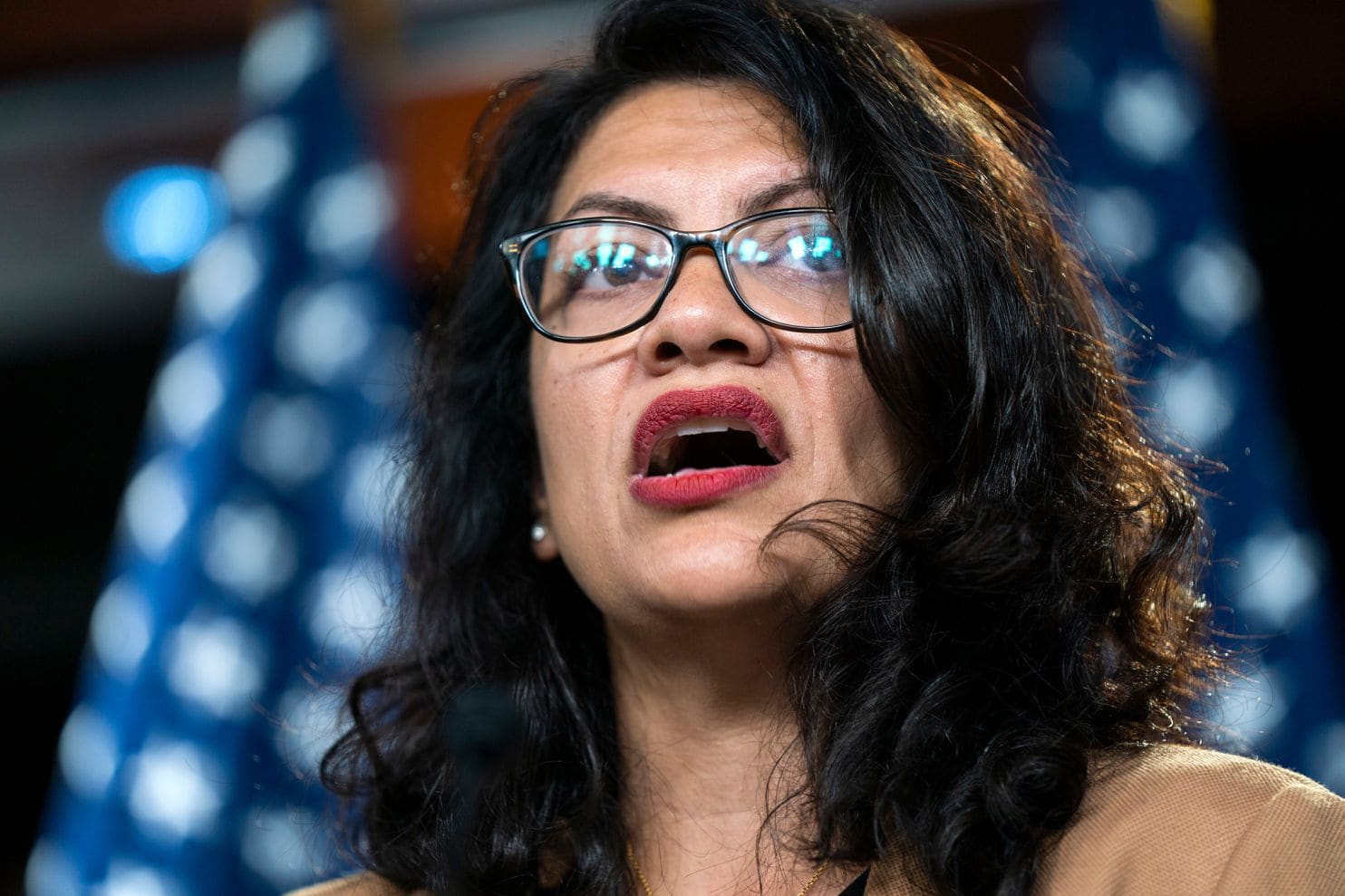 The House on Tuesday overwhelmingly passed a measure condemning efforts to boycott and economically isolate Israel over its policies toward Palestinians, an explosive global issue that exposed fissures inside the Democratic ranks.

The 398-to-17 vote comes after months of turmoil centering on Reps. Ilhan Omar (D-Minn.) and Rashida Tlaib (D-Mich.), two Muslim freshmen who have stood accused of anti-Semitism over public remarks they have made referencing Israel and the Holocaust.

The congresswomen, repeatedly singled out by President Trump in the past week, opposed the resolution, arguing that it infringes on free speech and the right to participate in boycotts for human and civil rights.

Trump renewed his attacks on Omar on Tuesday, calling her an “America hating anti-Semite” in a tweet. Omar apologized in February after suggesting that Israel’s American supporters were motivated by money.

The Boycott, Divestment and Sanctions movement, or BDS, calls on the international community to withdraw investments and shun the Israeli government, businesses and other institutions to win greater rights for Palestinians living in disputed territories. Its critics argue that its goals would fundamentally undermine Israel’s status as a Jewish homeland.

“You want to criticize the government? That’s your right. You want to stop buying products from a certain country? That’s also your right,” said House Foreign Affairs Committee Chairman Eliot L. Engel (D-N.Y.). “But participating in an international commercial effort that undermines Israel’s legitimacy and scuttles the chances of a two-state solution isn’t the same as an individual exercising First Amendment rights.”

Engel said of the BDS movement: “It’s a fraud. It’s Israel-hating. It’s Jew-hating. We’ve had enough of that in the world.”

The only opposition voiced Tuesday on the House floor came earlier in the day from Tlaib, who invoked her Palestinian grandmother in opposing the resolution, which she said “attempts to delegitimize a certain people’s political speech and send a message that our government can and will take action against speech it doesn’t like.”

“I can’t stand by and watch this attack on our freedom of speech and the right to boycott the racist policies of the government and state of Israel,” she said.

Omar and Tlaib last week introduced a measure in conjunction with Rep. John Lewis (D-Ga.), a key figure in the civil rights movement, that “affirms that all Americans have the right to participate in boycotts in pursuit of civil and human rights at home and abroad, as protected by the First Amendment to the Constitution.”

The text of the measure does not specifically mention the BDS movement but points to past boycotts of historical significance, ranging from the Boston Tea Party to the Montgomery bus boycott, as well as attempts to influence affairs abroad including boycotts of Nazi Germany and apartheid South Africa.

The measure, as of Tuesday, had garnered only six additional co-sponsors and is not expected to receive further consideration in the Foreign Affairs Committee or on the House floor.

In defending the movement, its co-founder, Omar Barghouti, said in a statement circulated on the movement’s social media accounts that the House effort “would directly undermine the First Amendment” and “includes outright lies about the peaceful BDS movement.”

But members of both parties targeted the rhetoric espoused by Barghouti and other BDS leaders, as well as their opposition to a “two-state solution” to the Israeli-Palestinian conflict in which both parties would negotiate a peace deal allowing them to govern their own sovereign territories side by side.

Republicans on Tuesday said the bipartisan resolution — co-authored by Reps. Bradley Schneider (D-Ill.), Jerrold Nadler (D-N.Y.), Lee Zeldin (R-N.Y.) and Ann Wagner (R-Mo.) — was a welcome statement but some said it did not go far enough. They called for the House to take up a Senate-passed bill that would allow state and local governments to make their own laws barring public funding for entities that engage in anti-Israel boycotts.

“We need teeth — words and action,” said House Minority Whip Steve Scalise (R-La.), calling for the passage of a House companion to the Senate legislation.

The resolution has been a thorn for Democratic leaders for months. Many have been wary of inflaming tensions around Israel after Republicans had used the issue as a cudgel against Democrats — particularly against Omar and Tlaib. Moreover, some want to see more action to challenge President Trump’s stalwart support for Israeli Prime Minister Benjamin Netanyahu and his government’s pro-settlement policies, which many believe are undermining a lasting peace deal.

“Rather than divide our caucus, let’s get the Republicans on the record about whether they support the Trump administration’s one-state solution,” said Rep. Ann Kuster (D-N.H.), who has sought to dissuade party leaders from taking up the BDS matter.

But scores of other members told leaders that they wanted to send a message condemning the movement, and more than 300 lawmakers co-sponsored the resolution taken up Tuesday. Members of the moderate Blue Dog Coalition and Problem Solvers Caucus, in particular, threatened to sign on to a discharge petition for the Senate-passed bill if no action was taken before the summer recess set to begin Friday, according to two Democrats familiar with the discussions.

The internal drama over Israel is not quite over for Democrats: Several lawmakers are angry that leaders have yet to schedule a vote on another resolution authored by Reps. Alan Lowenthal (D-Calif.), Karen Bass (D-Calif.) and Gerald E. Connolly (D-Va.) endorsing a two-state accord as the only path to resolving the Israel-Palestine conflict.

The measure passed the House Foreign Affairs Committee last week, and many lawmakers expected it to appear on the floor this week alongside the BDS resolution. But according to Lowenthal and Connolly, Engel is blocking its consideration on the floor over calling a two-state solution the “only” path to peace.

Leaving the meeting, House Majority Leader Steny H. Hoyer (D-Md.) said the dispute was unresolved but he hoped to hold a vote on the measure this week: “The message is, we’re for the two-state solution . . . as opposed to worrying about this word, that word or the other word.”

But Lowenthal said he was not interested in watering down the language. “This is a set of values that we believe in protecting,” he said. “There is no way we see, without a negotiation between the two states, that Israel can survive as a Jewish and democratic state.”

He cited the approaching Sept. 17 Israeli elections, which are expected to determine whether Netanyahu continues as Israel’s longest serving prime minister. A House vote endorsing a two-state solution could be interpreted as a shot at Netanyahu, who has retreated from that path.

Said Lowenthal, “There are forces out there that do not want this bill to come up before the election.”

While the conflict simmers, Engel said on the floor Tuesday he hoped passage of the anti-BDS measure would put the partisan controversies surrounding Israel to rest.

“It’s been like catnip for our friends in the press who cover our work, and frankly, this issue has been politicized in a way that I find ugly, and that’s ultimately harmful to the U.S.-Israel relationship,” he said. “What you see with this measure is a real bipartisan reflection on how his body regards our country’s relationship and support for Israel.”