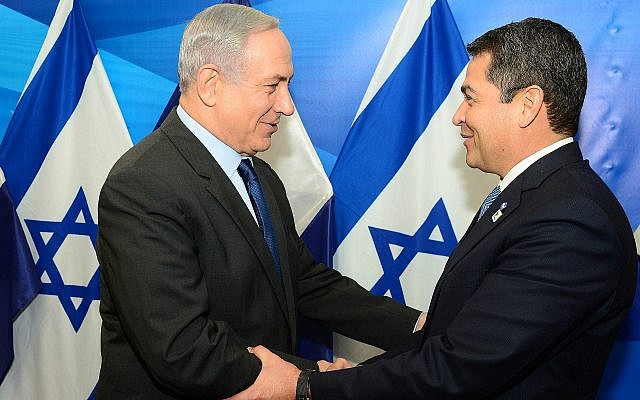 The diplomatic office in the city will be an extension of Honduras’s Tel Aviv-based embassy.

“For me it’s the recognition that Jerusalem is the capital of Israel,” Hernandez said on Tuesday.

The Honduran foreign ministry said in a statement Israel had proposed that Honduras move its embassy to Jerusalem, which is being “analyzed and evaluated in the international and national context.”

US President Donald Trump recognized Jerusalem as Israel’s capital in late 2017 and officially moved the US embassy there last May, sparking a deterioration in relations with the Palestinians.

Guatemala and Paraguay followed suit while Brazil said it was studying the possibility. Paraguay reversed its decision four months later, after a change in government.

Moving an embassy to Jerusalem is highly contentious. Israel claims all of Jerusalem as its capital, while Palestinians view East Jerusalem as the capital of their future state.

Most diplomatic missions in Israel are situated in or near Tel Aviv as countries try to maintain a neutral stance over the status of Jerusalem.

The Honduran announcement comes a day after Prime Minister Benjamin Netanyahu’s wife Sara announced in a live video stream on a Likud campaign Facebook page that Honduras will open a diplomatic facility in Jerusalem next week, and suggested she was responsible for making it happen.

“I’m happy to announce that on Sunday Honduras is opening a diplomatic mission in Jerusalem, a step on the way to an embassy,” she said in a Facebook live video with Culture Minister Miri Regev.

The Israeli Foreign Ministry confirmed in a Tuesday statement that Honduras will establish a trade office with diplomatic status and that Hernandez, accompanied by his wife, will arrive in Israel on Saturday night to participate in the opening ceremony.

The trade office is a first move toward “the future relocation of the Honduras embassy to Jerusalem,” the ministry said.

Sara Netanyahu claimed the development came after her government-funded trip last year to Guatemala, which neighbors Honduras. “When I visited Guatemala I spoke with [First Lady] Patricia Morales and her husband the president, I asked them to act vis-a-vis Honduras so it’ll move its embassy to Jerusalem,” she said.

“Right there and then, [Guatemalan President Jimmy Morales] called his friend the President of Honduras Juan Orlando Hernandez and said to him that he is sitting with me at lunch and I proposed that he move the embassy to Jerusalem. And thus began the dialogue between the countries that will reach its peak this coming Sunday with the opening of a diplomatic mission in Jerusalem.”

Guatemala already moved its embassy to Jerusalem in May 2018, shortly after the US relocated its mission from Tel Aviv to the capital.

Unlike countries such as the US and Guatemala, Israel has no first lady, and the prime minister’s spouse holds no special status.

Sara Netanyahu made her diplomatic trip to Guatemala in early December 2018. Officials in the Prime Minister’s Office hailed the visit — the first time a prime minister’s spouse has gone on an official trip alone — as “historic,” saying it further cemented the robust bilateral ties between Israel and Guatemala. No reporters were invited to join the trip.

Later in December, Channel 12 reported that a delegation of senior officials from Honduras visited Israel, reportedly to explore the possibility of moving the Honduran embassy to Jerusalem, after secret talks with the prime minister.

According to that report, Honduras is demanding that Israel open an embassy in its capital, Tegucigalpa, and deepen bilateral trade in exchange for relocating its own mission. A Foreign Ministry spokesman confirmed the delegation visit but said only that there was an “ongoing process of discussions that has yet to mature.”

The Hondurans are particularly interested in getting advice from Israeli experts on cyber issues, crime fighting, water and agriculture, the TV report said at the time. Foreign Ministry sources were quoted as saying that Honduras also indicated that it is keen to see improved ties with the administration in Washington.