Honduran president: I will not capitulate to anti-Israel threats 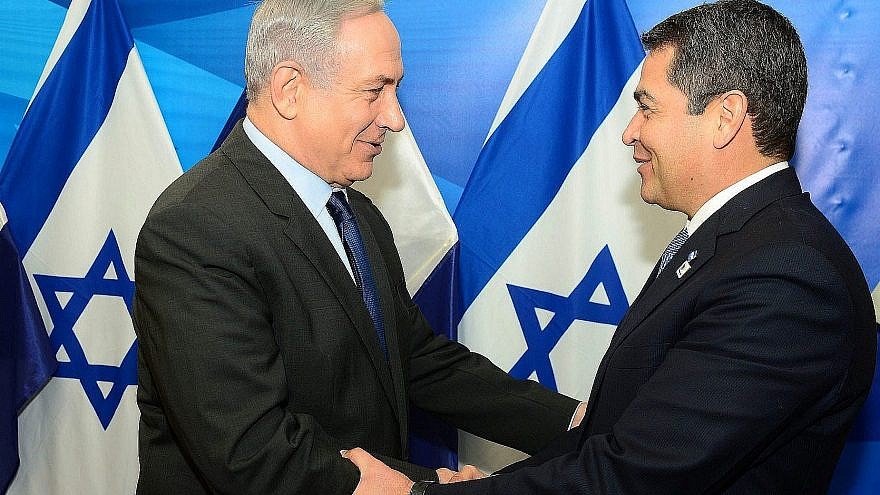 (December 9, 2019 / Israel Hayom) HOLLYWOOD — Honduran President Juan Orlando Hernández was one of the most senior political figures to attend the annual Israeli-American Council (IAC) summit in Florida over the weekend.

Hernández seemed to enjoy every moment of the three-day confab, proving once again that his country is an ally of the Jewish state.

“This organization is just wonderful,” he told the summit. “It feels like a big family here.”

“I can feel the love that fills these halls. It’s a huge honor to be part of this IAC experience because this is my family—the family I joined when I was a 22-year-old sent to Israel,” he said.

Hernández was referring to his stint as part of the MASHAV leadership program, where the Israeli Foreign Ministry invited him to take part in its international development cooperation initiative aimed at introducing other countries to Israel’s impressive technological know-how on the environment and agriculture.

His time in Israel opened a whole new world for the young diplomat, and today he wants to show his gratitude to a country that has given him so much.

Addressing the approximately 4,000 attendees at the IAC summit, he acknowledged that his willingness to recognize Jerusalem as the capital of Israel and open up a trade office in the holy city has hurt his country’s foreign relations.

Specifically, Hernández said, the decision cost the country the presidency at the U.N. General Assembly.

However, Hernández has no plans to step back from his pro-Israel advocacy any time soon.

Speaking on the sidelines of the conference, he told Israel Hayom he fully intends to move forward in the same direction, with the ultimate goal of relocating his country’s embassy to Jerusalem.

“We’re going forward [with our plans],” he said.

During his speech, he stated with pride that Honduras was one of the few countries that supported Israel as it was being pelted with rockets by the Palestinian Islamic Jihad last month.

“As President [Donald] Trump has said, Israel has an absolute right to defend herself,” he told the crowd on Sunday.

Hernández said his country has taken a beating in other forums as well, specifically because of its pro-Israel stance.

“The anti-Israel forces are threatening Latin America, both through political means and also with its use of propaganda,” he said.

He said the anti-Israel sentiment worldwide has reached a boiling point.

Quoting from an Israel Hayom article, he said, “In March of 1992, Iran and Hezbollah executed a horrifying attack in Buenos Aires. Thirty people were killed and 242 were injured in the carnage. Then, in 1994, a suicide bomber with an explosive in his truck blew up the Jewish community center in the center of the city, killing 85 people and injuring more than 300.”

Because of those events, he said, “We must create a trilateral relationship that connects Israel with its Israeli friends in Latin America and its supporters in the United States. We have common values, common threats and common rivals.”

As for the boycott, divestment and sanctions movement, Hernández said that threat must be addressed as well, especially considering the lessons we learned from the Holocaust.

He told Israel Hayom that the IAC has “launched an agenda to construct a legal framework to share with the countries of Latin America how to fight against BDS in the region.”

In his speech, Hernández said: “Today, when the last survivors of the Nazi concentration camps are still able to offer their testimony, it is horrifying that the existence of Israel is under threat by the BDS movement, as we see the rise in anti-Semitism in the world, as rockets are fired at the Israeli people, we must say, ‘Never again! Never again!’”