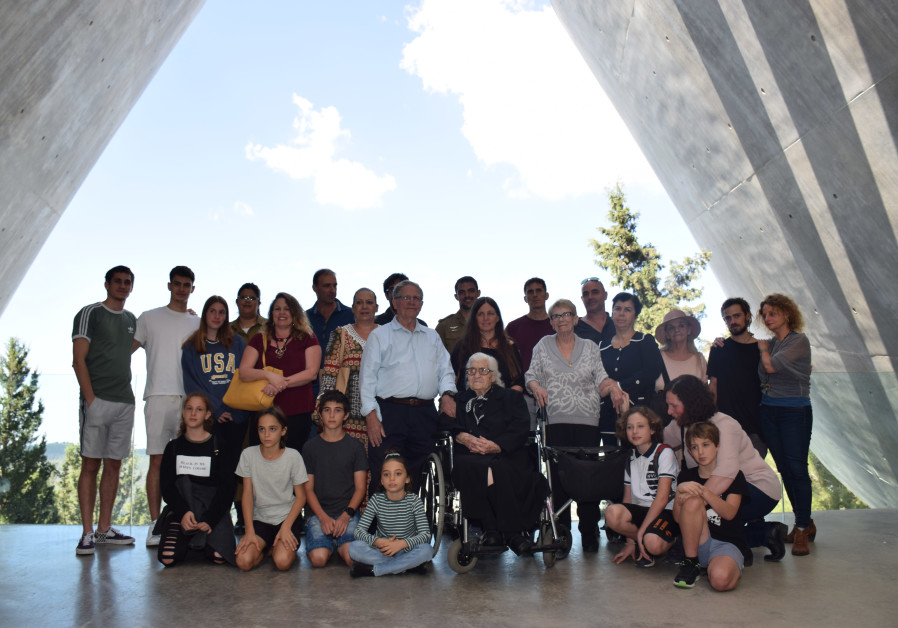 There was not a dry eye in sight as siblings Sarah Yanai and Yossi Mor embraced the woman who saved their lives in Greece during the Holocaust.

On Sunday, Melpomeni Dina (née Gianopoulou) reunited with Yanai and Mor (whose family name had been Mordechai) in an emotional meeting when they introduced their rescuer, 92-year-old Dina, to almost 40 family members.

The meeting took place at Yad Vashem, the meeting facilitator, which was sponsored by the Jewish Foundation for the Righteous.

With tears streaming down her face, Dina told Mor that his grandson, currently serving in the IDF, “resembles you as a child.”

“You are no longer that small boy that I remember,” Dina added, crying and laughing at the same time.

After the two embraced Dina, Yanai told reporters that she was so happy.

“There are no words to describe this feeling,” she said. “It is very emotional for us to be together again.”

Dina responded that it had been “so long” and invited the siblings to come back with her to Greece.

The Mordechai family lived in Veria, Greece, a small town of 600 Jews near Thessaloniki. Today, they reside in Ramat Hasharon and Beersheba.

As the Germans rolled into Veria, Dina and her older sisters Efthimia and Bithleem Gianopoulou risked their lives for almost two years to help the Mordechai family, and together with members of the Axiopoulos family, gave them refuge and provided them with food, including Miriam (Mari) Mordechai, and her children: Sarah, Asher, Shmuel, Rachel and Yossi.

EFTHIMIA FIRST met the Mordechai family while studying to become a seamstress with the Mordechai mother, who did not charge her for lessons since she had been orphaned at a young age.

Efthimia grew close to the Mordechais and visited them regularly, even after they went into hiding. When their location was compromised, Efthimia arranged for them to move to her home in Veria, where she lived with her two younger sisters, 15-year-old Bithleem, and 14-year-old Melpomeni. In one room, they accommodated all the Mordechai family members.

“They were a very poor family,” Mor explained. “They saved us because they loved my mother for her good heart.” “She [Dina] reminded me how we used to play together,” Mor told reporters. “Thanks to her, we have our large and beautiful family.”

As the war continued, the three sisters shared their food rations with the Mordechai family and sheltered them despite the risk to their own lives.

With food supplies scarce and expensive, Bithleem and Melpomeni farmed a piece of land they owned in a swamp near Giannitsa, around 40 km. from Veria. They would return from working the land, carrying the provisions on their backs for all 10 people.

One day, little Shmuel became gravely ill. Bithleem took him and his sister Sarah to the hospital, but he died at age six.

After Shmuel’s death, and the authorities discovery of the family’s hiding place, Melpomeni’s family helped the Mordechai family flee to the Vermio mountains, continuing to provide for them until the war’s end.

“Church bells would be rung by locals when the Nazis were searching the mountains to warn us,” Mor recalled. “One day, the bells just kept ringing and ringing – that was the day the war ended.”

On April 12, 1994, Yad Vashem recognized Melpomeni Dina as one of the Righteous Among the Nations. The Axiopoulos were recognized as such in 1989. The heroic actions of the Gianopoulou and Axiopoulos families saved most of the immediate Mordechai family members during the war.

Dina told reporters that seeing Mor and Yanai’s descendants was incredibly moving for her and expressed that her and her sisters actions “were the right thing to do.” Mor and Yanai both said they were feeling “very emotional and excited” about the special get-together.

Mor’s grandson, Imri Dor, told The Jerusalem Post that he was “super excited” to meet Dina.
“I’d heard so much about it growing up and it’s really special to finally put a face to the name,” he said, “She is a great inspiration, I hope that I will have the same courage. “I’m so proud to be here,” he added.

Stanlee J. Stahl, the vice president of Jewish Foundation for the Righteous, explained to the Post that “to the best of my knowledge, this is the last reunion [of rescuers and survivors] that will ever take place.”

She said that since 1992 she has been organizing such reunions once a year but today, either the rescuers have died, the survivors have died or they are too frail to travel.

However, she shared excitement about this meeting being the first to take place in Israel, explaining that such meetings usually take place at JFK Airport in New York.

“One of the beautiful things about doing it in Israel is that you get to see the future generations – they [Mor and Yanai] got to have most of their family here for the reunion – including two grandchildren in [IDF] uniform,” Stahl said. “They saved this family so Israel could be a nation.”

For director of the Righteous Among the Nation’s department, Dr. Joel Zisenwine, these events are important because, as time goes on, there are “less and less survivors and rescuers.

“It’s quite rare and unique to see this coming together of rescuer and survivor, and descendants [of survivors] at Yad Vashem, which is an authorized commemorative organization for the Holocaust, and this makes it more meaningful,” he said.