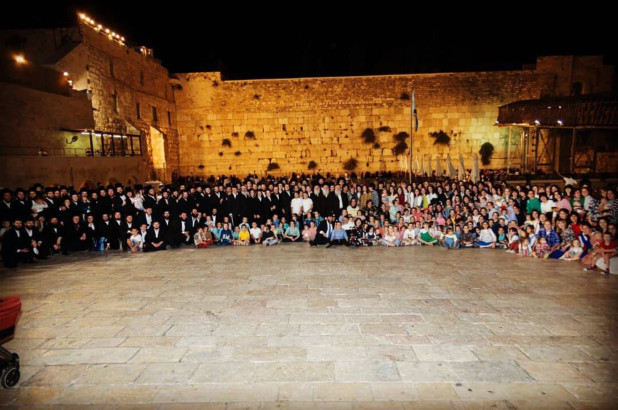 This is the picture of triumph over evil.

A Holocaust survivor celebrated her 104th birthday last week at the Western Wall in Jerusalem — and for the occasion posed for a photo surrounded by about 400 of her descendants, including her children, grandchildren and great-grandchildren.

In the camp, she watched as her mother was ripped from her and handed to Nazi doctor Josef Mengele, who performed deadly experiments on prisoners, her grandson, Meir Rosenstein, told Israeli reporter Sivan Rahav Meir.

After the Holocaust, Ovitz met the man who would later become her husband, Dov Ovitz, who had lost his wife and four daughters in the genocide.

The couple searched for surviving relatives together and lived in Austria, before eventually settling in Haifa, where they had two daughters and two sons.

For her milestone birthday, Ovitz had one request, for all of her descendants to come together at the holy Jewish site — and her children and grandchildren worked hard to make that happen.

“We do not have an exact number, but there are probably 400 grandchildren and descendants,” Shoshana’s oldest granddaughter, Panini Friedman, told Israeli news site Walla.

“It wasn’t a simple thing to organize this rare event,” said Friedman, who lives in Belgium.

Even the approximately 400 people at last Wednesday’s gathering didn’t cover everyone, said Friedman.

At the celebration, which symbolized a triumph over the Nazis, “everyone was there with tears in their eyes,” Friedman said.

Photos from the event show the huge crowd posing in front of the Western Wall, with men on one side and women on the other, adhering to Jewish Orthodox tradition.

Ovitz can be seen in one photo beaming as she sits in a wheelchair, holding a little boy’s hand.

“It was very emotional,” Friedman said.