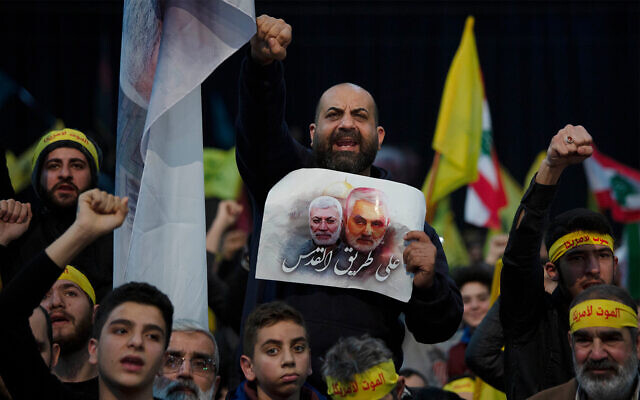 Hassan Nasrallah, leader of the Hezbollah terror organization, on Sunday threatened violence against the United States if it did not withdraw its troops from the Middle East, and said any future American attack on Iran would draw a retaliation against Israel.

“If in the coming days or weeks the US doesn’t withdraw its forces from the Middle East, the American soldiers will return to the US in coffins,” Nasrallah declared.

He said that Iran’s missile strike on bases housing US troops in Iraq showed Tehran’s military strength, since the missiles it used were produced in Iran, Channel 13 news reported.

Nasrallah made the remarks at a memorial ceremony for slain Iranian general Qassem Soleimani in Lebanon.

Hezbollah, which is designated a terror organization by the US and Israel, has vowed to avenge the killing earlier this month of Soleimani, who oversaw Iran’s regional security strategy.

Hezbollah is considered an Iranian proxy in Lebanon.

“All the American bases in the Middle East are within range of Iran’s accurate missiles,” Nasrallah said. “The attack on the American bases is also a strong message to the Zionist entity, that is always planning to ‘play’ with Iran. [Prime Minister] Netanyahu always dreams of sending his air force to attack the infrastructure or nuclear facilities in Iran.”

Netanyahu, said the Hezbollah chief, is “a fool” who “doesn’t understand where he’s dragging the entity he heads… When they hear the supreme leader [Ali Khamenei] and other Iranian leaders threaten Israel, the Zionist entity, they should take those threats seriously.”

Nasrallah said that Tehran had conveyed to Washington through intermediaries and via the media that any American attack against Iran would bring a strong response against the US and Israel.

Nasrallah said that Hezbollah today was able to defend Lebanon thanks to Iran and Soleimani.

Soleimani had close ties with Hezbollah and was heavily involved in its operations. In a rare interview late last year, Soleimani claimed he and Nasrallah escaped an Israeli assassination attempt when Israeli aircraft targeted them in Beirut during the Second Lebanon War in 2006.

“Hezbollah’s great successes in south Lebanon in 1999 and 2000 are a credit to Soleimani, including Israel’s withdrawal from south Lebanon,” Nasrallah said.

He also referred to the Ukrainian airliner that Iran accidentally shot down last week outside Tehran, killing 176, saying that no country could act as transparently as Iran had. Iranian authorities denied any responsibility for several days before admitting to downing the aircraft on Saturday.

Nasrallah’s comments came as Iranians in Tehran took to the streets Saturday night to rally against the regime, amid anger over the downing of the plane on Wednesday. Protests were also reported in other areas.

Iranians expressed horror after the head of the Islamic Revolutionary Guards Corps Aerospace division said his unit had shot down the airliner after mistaking it for a cruise missile.

US President Donald Trump tweeted in English and Persian in support of the protesters, writing, “The government of Iran must allow human rights groups to monitor and report facts from the ground on the ongoing protests by the Iranian people.”

Iranians had staged an unprecedented show of support for their leadership days earlier in a series of funerals for Soleimani, killed in a US drone strike on January 3.

Iran has reportedly warned Nasrallah that he could be the next target of the United States, and advised him to boost security measures following Soleimani’s death.

Last week, Iran released previously unseen video of Soleimani with Nasrallah and former top Hezbollah commander Imad Mughniyeh, who was killed in a reported joint operation between the Mossad and CIA in 2008.

The undated footage shows Nasrallah and Mughniyeh talking and laughing at a table, as Soleimani sits between them.

Soleimani was reported to have been with Mughniyeh shortly before he was killed by a car bomb in Damascus.

In response to Soleimani’s killing, Nasrallah called last week for Shiite militias to attack US military assets throughout the Middle East — including with suicide bombings — and predicted that the Americans would leave the region in “coffins,” taking Israel with them.

He also claimed that Israel had requested that the US kill Soleimani.

“Israel wanted to assassinate the Quds Force commander Qassem Soleimani in Syria, but it couldn’t or didn’t dare. It turned to the United States, which did it openly,” Nasrallah said. “Israel saw Soleimani as the most dangerous man since the state was established, since he encircled the country with missiles.”

Nasrallah has made limited public appearances and taken extensive security precautions since the 2006 war in Lebanon, with Netanyahu in September calling him “the man in the bunker in Beirut.”