Hezbollah No. 2 threatens Israel with ‘surprise’ retaliation in ‘coming days’ 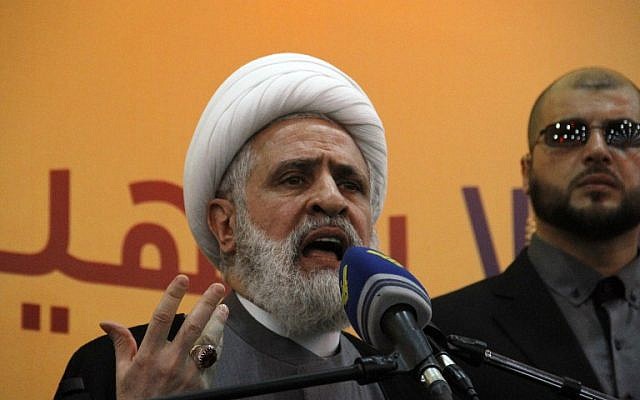 The deputy leader of Iran-backed Lebanese terror group Hezbollah on Tuesday night warned that his movement would deliver a “surprise” response in the coming days to a series of alleged Israeli raids.

Tensions between Hezbollah and Israel have skyrocketed since Saturday night, when two of the group’s members were killed in an Israeli strike in Syria, and drones crashed in a Hezbollah stronghold in Beirut, in an incident also blamed on Israel. On Monday, Lebanon claimed Israeli drones attacked a Palestinian base in the country’s east.

Israel took credit for the Syria raid, but has not commented on the other strikes. The model of drone used in the Beirut attack has raised considerable questions about their provenance, with analysts suggesting they could be Iranian.

The target of the drone attack in Beirut was an expensive and rare industrial mixing machine used in the creation of solid fuel, and the raid set back the terror group’s plans to develop long-range precision missiles by at least a year, according to Hebrew media reports late Tuesday.

After Hezbollah leader Hassan Nasrallah on Sunday threatened retaliatory strikes against Israel, his deputy added a warning of his own late on Tuesday.

“We want the strike to be a surprise… and so there is no interest in diving into the details. The coming days will reveal this,” Naim Qassem said in an interview with Russian channel RT Arabic, according to a Reuters translation.

Qassem said Hezbollah viewed the Beirut attack as one it is compelled to respond to, since failing to do so would let Israel set its own terms and change the status quo that has reigned since the end of the 2006 Second Lebanon War.

But he seemed to confirm an earlier report Tuesday by Reuters that cited sources close to Hezbollah as saying the organization was planning to launch a “calculated strike” on Israel but would seek to avoid an all-out war with the Jewish state.

“I rule out that the atmosphere is one of war; it is one of a response to an attack,” he said. “Everything will be decided at its time.”

In a televised speech Sunday, Nasrallah threatened: “I say to the Israeli army along the border, from tonight be ready and wait for us. Do not rest, do not be reassured, and do not bet for a single moment that Hezbollah will allow… aggression of this kind.”

Nasrallah called the Beirut drones the first such “hostile action” since the Second Lebanon War.

Israel’s military has been gearing up for a possible reprisal attack from Hezbollah, an Iran-backed terror group that is part of the Lebanese government, deploying extra troops to the northern border and limiting some movement along the frontier.

On Monday, an Israeli military official warned that any Israeli response would be disproportionate, and Israel sent a message to Lebanon via the US that it would not limit its response to Hezbollah but would view all of Lebanon as a legitimate target, according to reports by Israeli news outlets.

Also Monday, Prime Minister Benjamin Netanyahu warned Lebanon, Nasrallah and the head of Iran’s Quds Force to “be careful” with their words and actions.

Netanyahu told a conference in Jerusalem that Nasrallah “knows very well that the State of Israel knows how to defend itself well, and to repay its enemies.”

“I want to say to him and the Lebanese state, which is hosting this organization that aims to destroy us, and I say the same to Qassem Soleimani: Be careful about your words, and even more cautious about your actions,” he said.

Netanyahu went on to suggest that Nasrallah “calm down.”

According to Hariri’s office, the Lebanese prime minister told Lavrov that the attack in southern Beirut was “a dangerous act and aggression” and that he was counting on Russia’s role to “avoid more escalation and tension and to send message to Israel to stop violating Lebanese sovereignty.”

Lebanese daily Al-Akhbar reported Tuesday that senior US officials were putting pressure on Lebanon to rein in Hezbollah in order to avoid an escalation in violence, and were also attempting to defuse potentially explosive tensions.

According to the paper, US Secretary of State Mike Pompeo told Lebanese officials that Israel “did not intend to change the rules of the game” with the attack on the Iranian drone plot, explaining that the attack that killed Hezbollah personnel in Syria “was necessary to prevent an expected offensive from the Iranian side and that the Israeli forces confirmed that the headquarters was emptied of humans before bombarding it and that it didn’t intend to cause human casualties from Hezbollah’s ranks.”

He also reportedly said of the drone crashes in the Beirut neighborhood of Dahiyeh that “there was no intention to undertake an attack,” blaming the issue on a malfunction.